Donatello Bardi, alongside Leonardo da Vinci, Raphael Sanzio da Urbino, and Michelangelo Buonarroti, battled the Teenage Mutant Ninja Turtles as a part of the Renaissance Artists in Artists vs TMNT. He was portrayed by Rhett McLaughlin.

Donato di Niccolò di Betto Bardi, better known simply as Donatello, was born circa 1386, in Florence, Italy. He was an early Renaissance Italian sculptor predominantly known for his work in bas-relief, a form of shallow relief sculpting that, in Donatello's case, incorporated significant 15th-century developments in perspectival illusionism. His most famous pieces of art include David, Saint Mark, and the Equestrian statue of Gattamelata. He died due to unknown causes at the age of 80 on December 13th, 1466, in Florence, Italy. 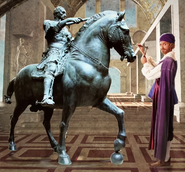