Donnie McMillin was born on June 21st in Ponca City, Oklahoma. He is a director, producer, co-founder of media company Robot Underdog, and lead assistant editor at O'Malley Productions. McMillin worked for Maker Studios (now Disney Digital) for two years and collaborated with various YouTube celebrities such as Timothy DeLaGhetto, Toby Turner, and Andy Milonakis, as well as some musicians such as Snoop Dogg. Furthermore, he has worked on the short films "Pills" and "Mockingjay: Burn". 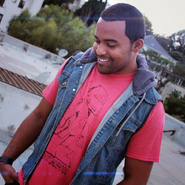