Drew Walkup is a director, writer, producer, and editor who helped produce four episodes of Epic Rap Battles of History, from Steve Jobs vs Bill Gates to Doc Brown vs Doctor Who. Currently residing in Los Angeles, California, Walkup is most notable for his work on a variety of short films and television series, such as the "Breaking Bad: Original Minisodes", Suitemates, and Sam Macaroni's "The Legend of Stick". 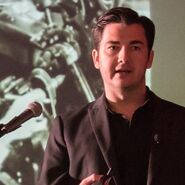 Walkup's Twitter avatar
Add a photo to this gallery
Retrieved from "https://epicrapbattlesofhistory.fandom.com/wiki/Drew_Walkup?oldid=1189925"
Community content is available under CC-BY-SA unless otherwise noted.