Two ED-209s made a cameo appearance in Terminator vs Robocop. They were animated by Forrest Whaley.

The Enforcement Droid Series 209, or ED-209, is a fully-automated peacekeeping machine created by Omni Consumer Products in the RoboCop franchise. The ED-209 serves as a heavily armed obstacle and foil for RoboCop, as well as a source of comic relief due to its lack of intelligence and tendency towards clumsy malfunctions.

For instance, during a boardroom demonstration by Dick Jones of the ED-209's "disarm and arrest" procedure with a board executive named Kinney as the test subject, in which Kinney is given a pistol and told to point it at the ED-209, it fails to recognize that he has dropped his weapon and blasts Kinney to death in an over-the-top fashion with its automatic cannons. Later, it is shown that the ED-209 cannot climb or descend stairs as it tumbles while trying to chase RoboCop.

Despite widespread complaints of malfunction in five American cities, including Detroit, the ED-209 would continue to stay in service. Currently, the units are rarely seen on the streets, and usually used as guards near OCP buildings. However, OCP has also negotiated contracts with the military for use in war.

Two ED-209s appeared in ESI Steel behind the Terminator at the end of his final verse, saying "Hasta la vista" alongside him.

A Behind the Scenes look at the ED-209 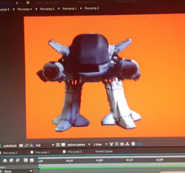 The ED-209 being animated by Forrest Whaley
Community content is available under CC-BY-SA unless otherwise noted.
Advertisement