Ebenezer Scrooge's mansion is where Scrooge resides. It is located within the London district, the City of London. It was here where he was visited by the ghost of his former partner, Jacob Marley, as well as the three ghosts of Christmas (Past, Present, and Yet to Come).

This is the location where Ebenezer Scrooge rapped. The particular part of the mansion shown is in the living room, next to a fireplace. After each of Scrooge's verses, the clock above the fireplace would strike one, then two, then three, making reference to A Christmas Carol, as the rappers or "ghosts" in that matter appeared right when the clock struck the certain number. All the rappers in the battle could also be seen dancing here during the "Who won? Who's next? You decide!" sequence.

A side view of the mansion 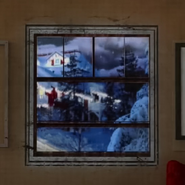 The North Pole outside of the window
Add a photo to this gallery
Retrieved from "https://epicrapbattlesofhistory.fandom.com/wiki/Ebenezer_Scrooge%27s_Mansion?oldid=1494259"
Community content is available under CC-BY-SA unless otherwise noted.