Edward Eugene "Ed" Vilderman, also known as SuperEd86, was born on February 8th, 1986, in Riga, Latvia. He is an actor, director, editor, writer, comedian, Internet sensation, and member of the Epic Rap Battles of History crew. He has frequently helped with the editing of the behind the scenes videos from Steven Spielberg vs Alfred Hitchcock to Deadpool vs Boba Fett. He is best known for making comedy videos on his YouTube channel, which has gained him over 42 million views and 373 thousand subscribers.[1]

Edward Vilderman as a street tough 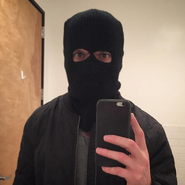