Eleanor Roosevelt appeared in the ERB News for Season 4.5. She was voiced by Nice Peter.

Information on the host

Anna Eleanor Roosevelt was born on October 11th, 1884, in New York City, New York. She was a politician, diplomat, activist, and the longest-serving First Lady of the United States, holding the post from March 1933 to April 1945 during her husband President Franklin D. Roosevelt's four terms in office. She is perhaps most remembered for changing the First Lady's role in the United States and the world by being more active in national and global political issues. She died at the age of 78 on November 7th, 1962, in Manhattan, New York. 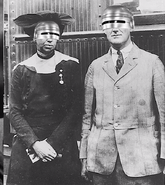 Eleanor and Franklin D. Roosevelt wearing RoboCop's helmets, as seen in an ERB News video
Add a photo to this gallery
Retrieved from "https://epicrapbattlesofhistory.fandom.com/wiki/Eleanor_Roosevelt?oldid=1431565"
Community content is available under CC-BY-SA unless otherwise noted.