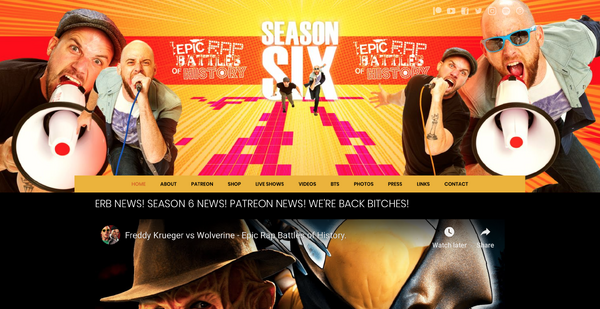 The website includes the ability to view every ERB that has been released (in addition to news videos, content released on the ERB2 Channel, exclusive behind the scenes videos, and content released by Nice Peter and EpicLLOYD on their respective YouTube channels), a forums section, contact information, social media browsing, and an official shop that sells ERB-related merchandise. In December 2017, the site has released the demo of eight battles, including the scrapped battle King Henry VIII vs Hillary Clinton, and two beatbox mashup of rappers portrayed by Lloyd in Season 1.[1]

A link to the site

Retrieved from "https://epicrapbattlesofhistory.fandom.com/wiki/Epic_Rap_Battles_of_History_Website?oldid=1395340"
Community content is available under CC-BY-SA unless otherwise noted.