Epistra has worked as a beat producer for seven episodes of Epic Rap Battles of History.

Thomas Dean, professionally known as Epistra, is a music producer who resides in San Jose, California. He has produced beats for Zeus vs Thor, Lewis and Clark vs Bill and Ted, Shaka Zulu vs Julius Caesar, J. R. R. Tolkien vs George R. R. Martin, Frederick Douglass vs Thomas Jefferson, The Joker vs Pennywise, and Thanos vs J. Robert Oppenheimer. Epistra has worked with a variety of other artists, such as DeStorm Power and Klarity. He has gone on to produce music for commercial companies, such as Mazda, Hulu, and Disney. His website can be found here. 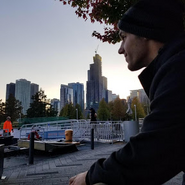 Epistra's YouTube avatar
Add a photo to this gallery
Retrieved from "https://epicrapbattlesofhistory.fandom.com/wiki/Epistra?oldid=1469318"
Community content is available under CC-BY-SA unless otherwise noted.