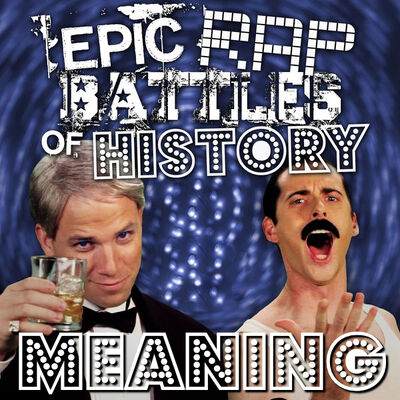 (Sinatra starts out by saying that there's something wrong with Mercury's face, and that it looks just plain ugly.)

With those teeth, when you're through, there'll be no dust left to bite!

(Mercury had very large teeth. "Another One Bites the Dust" was a song by Queen, so Sinatra says that if Mercury bit some dust, his big teeth would bite all of it, and there'd be none left. The song is written from the viewpoint of a killer with a gun, with "biting the dust" being slang for abrupt death, as from shooting.)

("There's No Business Like Show Business" was a song recorded by Frank Sinatra. He also tells Mercury that he has to look presentable for show business and supposes that Mercury has no idea on how to be formal like him.)

Show some class when you dress; shave that bush off your lips!

(Sinatra was known to have dressed in fancy suits and tuxedos, showing that he has class. On the other hand, Mercury wore some flamboyant and informal clothing, such as vests, jeans, and even performed at Wembley wearing tracksuit bottoms. He also implies that Mercury's mustache is too big and poorly groomed, and that he would look better by shaving it off.)

(Mercury was the lead singer of Queen, a British rock band. Sinatra thinks the name of their band sounds girly, as "queen" can sometimes refer to a gay person, as can the word "sweet" in this context. Sinatra also criticized rock and roll music, so he sarcastically comments about how the name sounds feminine for a rock and roll band. He could also mean to be condescending about the fact that Queen named their band after the monarch of their country.)

You dance like you rode a bicycle race with no seat!

(Riding a bicycle without a seat would mean the pole in which the seat stands on would be creating an "up and down" motion into the area of interest for homosexuals, so Sinatra says that Mercury dances badly. It could also be a reference to "Bicycle Race", which is the name of a Queen song.)

That's what's wrong with you people; you'll do anything to get famous!

(Sinatra says that people like Mercury would do anything to get fame or stand out. 1980s pop music in the UK was notoriously flashy and eccentric.)

You changed your name to Mercury. You should've been Freddie Uranus!

(Before he was famous, Freddie Mercury's name was Farrokh Bulsara. He changed it to Mercury, which is the name of a planet, similar to Uranus. Uranus is pronounced "your anus," so Sinatra thinks that would have fit more with his character since he was bisexual.)

You think I haven't heard those things before?

(Mercury had lots of homophobic harassment in the past, so these gay jokes are nothing new to him. Because of this, he thinks Sinatra's insults are unoriginal.)

You're just a bully who's too scared to go to war.

(Mercury says that being ridiculed in the past makes Sinatra no different from bullies he already faced before. He also calls Sinatra a wimp who was too scared to fight because Sinatra reportedly used his "mafia" connections to avoid serving in World War II.)

You had a hit song called "My Way," but someone else wrote it.

(In 1968, Paul Anka wrote a song for Sinatra called "My Way". The song itself is known to be a rip off of the song "Comme d'habitude" ("As Per Usual") by French singer Claude François. Paul Anka purchased the rights of the song to make a cover of it. Mercury finds it ironic that while Sinatra was singing about doing things his own way, his song was written by another person.)

You're the least talented rat in your whole pack of rodents!

(Mercury is referring to the Rat Pack, the nickname given to the cast of the 1965 film Ocean's Eleven. Besides Sinatra, other members included Dean Martin, Peter Lawford, Joey Bishop, and Sammy Davis, Jr. He also says that out of these "rodents", or members of the Rat Pack, Sinatra had the least amount of talent.)

You've got four notes in your whole range. You can't act and you can't dance!

(Mercury was believed to have had one of the largest vocal ranges in recorded history, so comparing that to Sinatra's small range of notes makes him look like an inferior singer. Furthermore, Mercury calls Sinatra a bad actor and dancer.)

I'm more powerful than you when I'm wearing women's pants!

(This goes back to Sinatra's line telling him to wear clothes with more class. Members of Queen were dressed as women in the music video for "I Want to Break Free." Mercury was known to wear female clothing, and even though he looks flamboyant as a bisexual, he's still more manly and powerful than Sinatra.)

Why do you stand there in a suit? It's like you're trying to bore me!

(Sinatra wears sophisticated fancy clothes like a suit and tuxedo. Clothing like that is often associated with businessmen and the idea of having a formal, serious job, which Mercury points out here. Mercury would often perform wearing a wife beater (undershirt). )

Because my songs have balls! They're the anthems of victory!

(As Sinatra performs many swing and love songs, Mercury's songs are manly due to their rock nature. Some of their lyrics also talk about victory, such as "We Are The Champions".)

Your music is like the soundtrack to a vasectomy!

(A vasectomy is a surgical operation where a man is sterilized, meaning he can no longer ejaculate and therefore cannot reproduce. It is an uncomfortable operation that can be painful. He says that listening to Sinatra's songs is like being given a vasectomy – they cause physical pain to hear. This is also referencing his previous line; implying that while Mercury's own songs have balls, Sinatra's songs are like getting them cut.)

You're in the pocket of the mafia and everybody knows.

(In the late 1960s, Sinatra was accused of having connections with the Mafia by FBI leader J. Edgar Hoover. Sinatra denied any ties with the Mafia, but he was friends with many people who were convicted for being in the Mafia.)

(Mercury is executing a blow that will be explained shortly.)

(Guinea and dago are two racial slurs to Italians. Sinatra was of Italian descent. It's a reference to the "Galileo" section of the 1975 Queen song "Bohemian Rhapsody", in which the line is "Galileo, Galileo, Galileo, Figaro!" "Guinea" stands for the Guinea African Coast, implying Italians are not white, and "dago" is a racial slur which can be used to refer to Italian people. This verse is ironic as Mercury was born in Zanzibar, which is off the coast of Tanzania to Indian Parsi parents.)

Easy, jaws of life; I can't stand a racist.

(The "Jaws of Life" are huge hydraulic scissors used by firefighters to cut open car doors, so Sinatra is making another joke about Mercury's large teeth. He also doesn't want to involve any other racist statements in this battle, as Mercury's last line about Guinea and Dago are discriminatory terms for Italians like Sinatra.)

I love the coloreds and the queers. Just ask Sammy Davis!

(Though Sinatra tried ending segregation for casinos in Las Vegas, he got a reputation of being racist and homophobic. He tries to call blacks and gays by "the coloreds and the queers" because those were slightly less offensive terms in his era. Britain, where Queen comes from, has had a history of racism in its past, especially during its long colonization era. Sinatra denies being against LGBT people and colored people, in which Mercury himself would fit into. Sammy Davis, Jr. was a black singer/actor, who was also a member of Sinatra's Rat Pack. He was bisexual, also known for once guest starring on the 1970s sitcom All in the Family and kissing main character Archie Bunker on the cheek. As a friend of Sinatra, he tries to show that he can cooperate with a colored bisexual.)

Look, we all wanna swing, baby, but you took it too far.

(Swing was a very popular form of jazz in Sinatra's prime and Sinatra would sing primarily swing songs with various big bands. To swing also meant having sex with another person's partner, but Sinatra thinks Mercury having sex with guys is taking it too far.)

You played butthole roulette, and you lost the draw!

I took one for both teams from a disease no one knew existed.

(Taking one for both teams is referring to Mercury's bisexuality, as in sacrificing himself for both gay and straight people; AIDS was virtually unknown until the 1980's, whereupon a handful of celebrities had been diagnosed with it.  At the time of its unmasking, AIDS was thought to be exclusive to gays, a myth debunked by later high-profile cases involving straights.)

I didn't leave a mark on history; I French-kissed it!

(To 'leave a mark on history' means to leave a large legacy behind after you die. French-kissing is a very passionate form of kissing, so Mercury says that he left a huge mark, or had a huge legacy, while also making reference to his own bisexuality.)

I'm a champion of the world (world!); extinguished in his prime! (prime!)

(A champion of the world refers to the line in the Queen song "We Are The Champions", as one of the lines says, "We are the champions of the world!" Mercury died at the age of 45—in his prime age—one day after publicly acknowledging he had AIDS. Since being extinguished would normally be said for a fire or light being doused, Mercury compares himself to being as hot as fire, which could come from a lyrics on the song "Don't Stop Me Now," which says, "I'm burning through the sky! Two hundred degrees, that's why they call me Mr. Fahrenheit!")

So kiss my ass, Frankie (ass!), but you'll have to wait in line.

(Another homosexual joke, saying that there are other people that have already lined up to kiss his ass and that Sinatra will have to wait for his turn. He also states that he is so amazing, people would line up to kiss his ass, a thing that the average person would not do. "Kiss my ass" was also a lyric in the Queen song "Death on Two Legs," which is said to be directed at Queen's original manager Norman Sheffield, who is reputed to have mistreated the band and abused his managerial role.)

This is show business, baby, tuck in those lips.

(This lyric is what developed into the lyrics, "Christ! News flash, kid: this is show business! Show some class when you dress, shave that bush off your lips!" As an insult toward Mercury's mouth, Sinatra tells Mercury to tuck in his protruding lips to make himself more presentable.)

What, you got midgets putting chap stick on you in shifts?

(As a continuation of the previous line, Sinatra ponders why Mercury has such protruding lips, claiming it might be the result of midgets, or little people, putting chap stick on him in shifts, implying the referenced midgets performing oral sex on Mercury (as chap stick is worn on the lips, and, considering midgets are too short to reach Mercury's own lips, they must be applying said chap stick by transferring it from their lips to his genitalia), making him contort his face in pleasure.)

(This lyric is what developed into the lyric, "(Ho!) What's wrong with your face, baby? Yikes!")

You got teeth and hair and shit all over the place!

(This lyric is what developed into the lyric, "With those teeth, when you're through, there'll be no dust left to bite!" Sinatra claims that Mercury has things like hair and teeth all over his face in a disfigured way.)