Frederick Charles "Freddy" Krueger is the main antagonist of the A Nightmare on Elm Street film series. He first appeared in 1984's A Nightmare on Elm Street directed by the late Wes Craven. He is depicted as a child serial killer who was burnt to death in a boiler room by the angry parents of murdered children. Following this, he is granted a chance by demons to continue existing within the realm of dreams, to which he accepts. Following this, he invades his to-be victims in their dreams, and, equipped with a glove armed with razors, causes their deaths in the real world by murdering them in the dream. In the dream world, he is a powerful force and almost completely invulnerable to damage. However, whenever Krueger is pulled into the real world, he has normal human vulnerabilities.

Krueger was created by Wes Craven, and had been consistently portrayed by Robert Englund since his first appearance. In the 2010 franchise reboot, he was portrayed by Jackie Earle Haley. In 2011, Krueger appeared as a playable character in the video game Mortal Kombat (also known as Mortal Kombat IX to avoid confusion with the original 1992 arcade game). He also appeared as a playable character in Dead by Daylight alongside other horror movie killers.

Wizard magazine rated Krueger the 14th greatest villain, the British television channel Sky 2 listed him 8th, and the American Film Institute ranked him 40th on its "AFI's 100 Years... 100 Heroes and Villains" list. In 2010, Krueger won an award for Best Villain (formerly Most Vile Villain) at the Scream Awards.

Flock of Seagulls called: they want their hair style returned,

Confirmation from Peter that Wax would portray Krueger 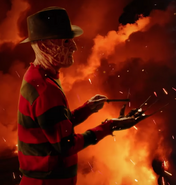 A closeup-shot with Krueger as Wolverine's claws

Retrieved from "https://epicrapbattlesofhistory.fandom.com/wiki/Freddy_Krueger?oldid=1471275"
Community content is available under CC-BY-SA unless otherwise noted.