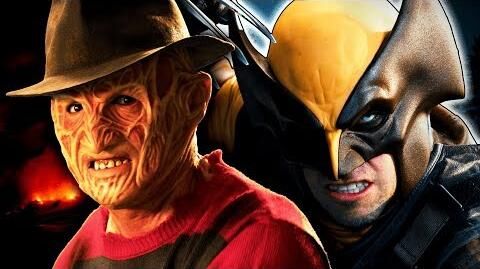 Freddy Krueger vs Wolverine is the seventy-second installment of Epic Rap Battles of History and the official premiere of Season 6. It features famous horror villain from the A Nightmare on Elm Street franchise, Freddy Krueger, rapping against Marvel superhero and X-Men member, Wolverine. It was released on April 20th, 2019.

EpicLLOYD as himself as Gandalf, representing the heroin joke

Flock of Seagulls called: they want their hairstyle returned,

Nice glove, bub, but I'm real from bones to teeth.

And that claw is like a strap on: there's a pussy underneath.

Don't sleep? That's all you got for me? Could defeat your ass with a cup of tea!

I been to hell and back and whooped Satan's ass, you got beat by a Nancy on Elm Street!

The PTA turned your face into Deadpool's ballsack,

Wrapped in a Where's Waldo? sweater,

Jason can't talk and he rocks the mic better!

So step into my catnap, see if you can hack that, better hang on to your whack hat,

'Cause your worst nightmare ain't Hugh Jack shit compared to the least of my Weapon X flashbacks!

You'll only ever be half of Edward Scissorhands!

So don't get me more pissed, chump.

I'll take your whole franchise out with a fist bump!

I'll call you tomorrow morning if I need my toast buttered.

I ain't got time for this. I'm saving the world. What qualities do you bring?

You're a pedophile from the Midwest. At least R. Kelly could sing!

So you've got the wrong room if you're looking for fear.

Only thing scares me is a fridge with no beer!

That face tells me you've met your match,

But come back if you've got another itch to scratch!

I'll be at the doctor when I'm through wrecking your spot

But only for a booster for my tetanus shot

The glove, the hat, the kid-touching: can't help but compare it

You're half MJ, half Subway Guy Jared

With that nut sac head looks worse than Deadpool

'Cause I'm looking at your face and you're already pretty burned

You better stay behind walls 'cause your face looks fucking awful

The sweat stains from that nasty hat are the real horror

When the glove comes off you're more like Freddy Mercury

When the glove comes off you're all gums and no teeth

Freddy Krueger vs Wolverine. ERB Behind the Scenes