Frederick Douglass, originally known as Frederick Augustus Washington Bailey, was born circa February, 1818, on a plantation in Talbot County, Maryland. He was an African-American social reformer, abolitionist, orator, writer, and statesman. After escaping from slavery in Maryland, he became a national leader of the abolitionist movement from Massachusetts and New York, gaining note for his incisive anti-slavery writings. He would later become a friend of Abraham Lincoln, though highly critical of Lincoln's supposed weak leadership.

In his time, Douglass was described by abolitionists as a living counter-example to slaveholders' arguments that slaves lacked the intellectual capacity to function as independent American citizens. He also actively supported women's suffrage, and held several public offices. Without his approval, Douglass became the first African-American nominated for Vice President of the United States as the running mate and Vice Presidential nominee of Victoria Woodhull, on the Equal Rights Party ticket. He died at the age of 77 on February 20th, 1895, in Washington, D.C.

Starting with your nickel: there's a real declaration!

You're a soft white Monticello Marshmallow!

Watching my people sweat while you sat playing cello! Hello!

But now you're facing me, Freddy D!

I'd never work for your ass, but I'll kick it for free!

(Ugh!) Your stone face on Rushmore ain't nothing!

The face of a free man, taught himself to read, man!

No compromise; you couldn't whip a 5th of me, man!

You got a self-evident truth of your own:

You let freedom ring, but never picked up the phone!

This ain't Louisiana, man. I ain't buying it!

You talk about freedom, but you ain't applying shit!

So no, we ain't cool, you founding absentee father!

Man, you had six babies with your slave mama and never even bothered

To free her when you died on the 4th of July!

It's a very important holiday, but what the fuck does it mean to this guy?

The day the 13th damn amendment was ratified!

And I ceased to be an alien to your unalienable rights,

Man, you did some good things; I ain't denying your fame.

I'm just saying they need to put an asterisk next to your name. 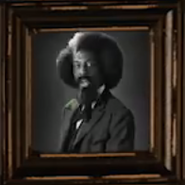