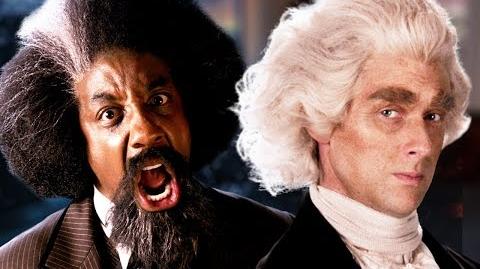 Frederick Douglass vs Thomas Jefferson is the sixty-first installment of Epic Rap Battles of History and the third episode of Season 5. It features American Founding Father, writer of the Declaration of Independence, and third President of the United States, Thomas Jefferson, rapping against anti-slavery activist, author, and politician, Frederick Douglass. The uncensored version was released on May 30th, 2016, and the censored version was released on June 1, 2016.

J. B. Smoove as Frederick Douglass

When in the course of human events,

It becomes necessary for a battle to commence,

Then kplow! I hit 'em with the illness of my quill!

Let me run down my résumé, will ya?

I told King George he could eat a fat dick!

When it comes to declarations, I'm the first draft pick!

I'll topple any tyrant, so kings and pirates beware!

I'm so down with revolutions, I invented the swivel chair!

But I've yet to read the three books you wrote about YOU!

Didn't come back from Paris to battle Pepé Le Pew!

Not to mention third President; the fuck'd you do?

Starting with your nickel: there's a real declaration!

You're a soft white Monticello Marshmallow!

Watching my people sweat while you sat playing cello! Hello!

But now you're facing me, Freddy D!

I'd never work for your ass, but I'll kick it for free!

(Ugh!) Your stone face on Rushmore ain't nothing!

The face of a free man, taught himself to read, man!

No compromise; you couldn't whip a 5th of me, man!

You got a self-evident truth of your own:

You let freedom ring, but never picked up the phone!

Alright, I admit it. I confess!

I participated in a broken system that I hated,

But I needed to keep my financial status situated!

And the words I used were "hideous blot"

To describe the slave trade and the pain it hath brought!

When I ran the whole state and still made it home for dinner!

This ain't Louisiana, man. I ain't buying it!

You talk about freedom, but you ain't applying shit!

So no, we ain't cool, you founding absentee father!

Man, you had six babies with your slave mama and never even bothered

To free her when you died on the 4th of July!

It's a very important holiday, but what the fuck does it mean to this guy?

The day the 13th damn amendment was ratified!

And I ceased to be an alien to your unalienable rights

Man, you did some good things; I ain't denying your fame.

I'm just saying they need to put an asterisk next to your name. 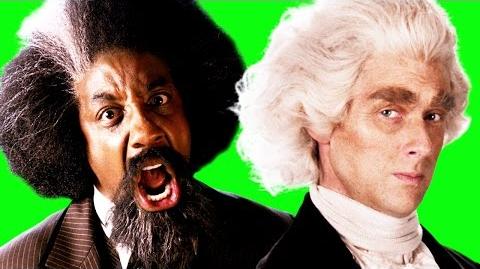 Frederick Douglass vs Thomas Jefferson. Behind the Scenes of Epic Rap Battles of History 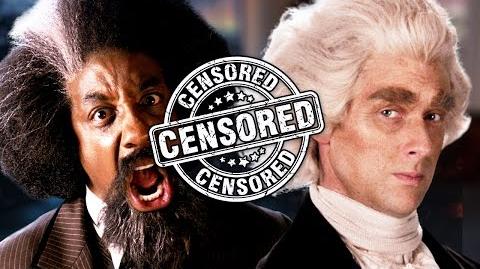 Retrieved from "https://epicrapbattlesofhistory.fandom.com/wiki/Frederick_Douglass_vs_Thomas_Jefferson?oldid=1494160"
Community content is available under CC-BY-SA unless otherwise noted.