Frederick II, better known as Frederick the Great (German: Friedrich der Große), was born on January 24th, 1712, in Berlin, Prussia. He was King of Prussia from 1740 until 1786. His most significant accomplishments during his reign included his military victories, his reorganization of Prussian armies, his patronage of the Arts and the Enlightenment in Prussia, and his final success against great odds in the Seven Years' War. He died at the age of 74 on August 17th, 1786, in Potsdam, Prussia.

[Note: Frederick the Great is in dark blue, Ivan the Terrible is in regular text, and additional voices are in italics.]

(Psst!) What about a flute-busting Prussian?

I'm Frederick the Great! Out the gate, first servant of state!

Hard as steel on the field, genteel in the palace!

Russia's fucked up, but no wonder why!

With your tundras and taigas and bears! Oh my!

I would pay a guy to tear out my eyes

If I had to look at your troll face every night!

Now, bring me my chair!

I'm weary from tearing you a new derrière from here to Red Square!

Fought a Seven Years' War; I ain't scared of a Tsar

'Cause beating you only took me twelve bars!

During Ivan the Terrible's third verse:

Frederick the Great playing the flute on the Prussian flag 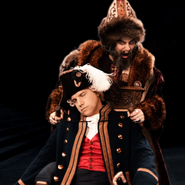 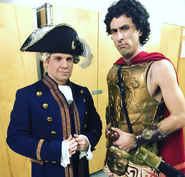 A picture of EpicLLOYD as Frederick the Great with Zach Sherwin as Alexander the Great from Lloyd's Instagram account
Add a photo to this gallery
Retrieved from "https://epicrapbattlesofhistory.fandom.com/wiki/Frederick_the_Great?oldid=1491155"
Community content is available under CC-BY-SA unless otherwise noted.