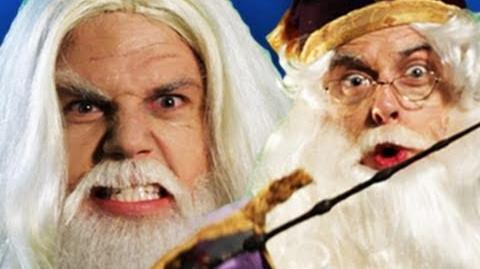 Gandalf vs Dumbledore is the eleventh installment of Epic Rap Battles of History and the eleventh episode of Season 1. It features The Lord of The Rings and The Hobbit character, Gandalf, rapping against Harry Potter character, Dumbledore. It was released on July 14th, 2011.

You shall not pass! I rap fast like Shadowfax!

Tom Riddle me this, you bitch: How's your little wand gonna beat my staff?

I leave mics in flames, torched by Gandalf!

Touch mine, Dumbledore, and scorch your other hand off!

You fool! You got Snaped! You're not a real fighter!

Death makes you die! It just makes ﻿my brights brighter!

Your ass is like Gringotts: everyone makes a deposit!

We all know you've more than a boggart in your closet!

The prophecy forgot to mention this day,

When I knocked your ass back to Gandalf the Grey!

Check your status: they call me headmaster. You're nothing!

Nice staff, you compensating for something?

I prefer the company of wizards, and I'm proud of it!

You try to win your battles with two fat hobbits!

You think your hairy-toed friends are gonna harm me?

Wait'll they get a taste of Dumbledore's army!

Do not take me for some conjuror of cheap tricks!

I don't give a Fawkes about your Order of Phoenix!

I'll tie a new knot in your beard with your wrinkly balls!

For I am the one rapper to rule them all!

Your spells are a joke, not funny ones either!

Mines of Moria? Ha! More like Mind of Mencia!

I'll expecto my patronum on your face, you little snitch,

And when I'm finished, I'mma fly like it's Quidditch! 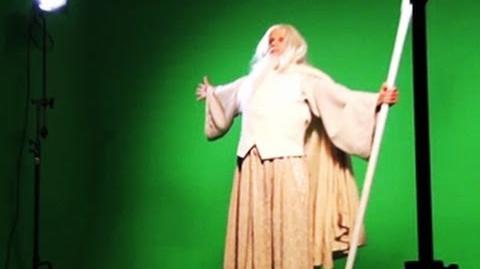 Epic Rap Battles of History 11 - Behind the Scenes 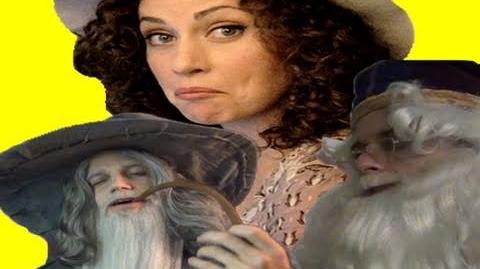