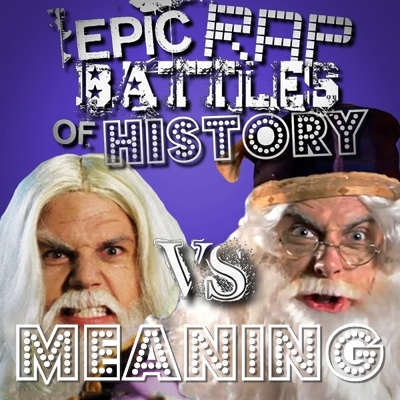 You shall not pass!

(This is Gandalf's famous quote from The Lord of the Rings: The Fellowship of the Ring, in which his team crosses the Bridge of Durin, and a Balrog of Morgoth follows them. Gandalf shouts that it shall not pass and breaks the bridge with his staff, causing the monster to fall into the abyss. He tells Dumbledore the same, implying that he will not win. To "pass" could also be saying Dumbledore's lyrics won't be good enough to pass a test, similar to the ones at Hogwarts.)

(Shadowfax is the name of Gandalf's horse, who is a very fast land animal. His raps can apparently match the speed of how fast Shadowfax runs.)

Tom Riddle me this, you bitch:

(A portmanteau of "Tom Riddle" (the true name of the main antagonist of the Harry Potter series, more commonly known as Lord Voldemort, whom Dumbledore taught during his time in Hogwarts) and the phrase, "Riddle me this," which implies Gandalf is questioning Dumbledore for an answer of his next line.)

(Wizards like Dumbledore wield magic wands, far inferior in size to magic staffs like Gandalf's. His comparison of the size between the two magical weapons is also an innuendo to Dumbledore's penis, calling it small and weak compared to Gandalf's.)

I leave mics in flames, torched by Gandalf!

(Gandalf will set the mic aflame with fire using his raps, as he is, of course, a wizard.)

Touch mine, Dumbledore, and scorch your other hand off!

(As Gandalf claims to burn mics, if Dumbledore tries to "take his mic", as in taking the microphone to begin rapping his verse, he will burn his hand off from the flames. Dumbledore's hand was nearly burnt off by a ring that was a Horcrux in Harry Potter and the Half-Blood Prince.)

You fool! You got Snaped! You're not a real fighter!

(Dumbledore was killed by Professor Severus Snape at the end of Harry Potter and the Half-Blood Prince. Gandalf is skilled not only in magic but also melee combat with swords, but Dumbledore uses only magic, so he is not as much of a fighter as Gandalf is. Gandalf uses the word fool as an insult numerous times during the Lord of the Rings trilogy. Notably, he says "Fly, you fools!" after the fight with the Balrog, and labels Pippin a "fool of a Tuk".)

Death makes you die! It just makes my brights brighter!

(After Dumbledore died, he stayed dead. However, after Gandalf was killed, he was resurrected more powerful as Gandalf the White, white being a brighter color than gray, which was Gandalf's alias beforehand. This is also a hidden play on advertisements for bleach or detergent aired over many years, which claim that the bleach or detergent will "make your whites whiter and your brights (colors) brighter".)

Your ass is like Gringotts: everyone makes a deposit!

We all know you've more than a Boggart in your closet!

(A Boggart is a magical creature in the Harry Potter series, which live in closets and come out in the form of people's greatest fear. This is another gay joke, referring to the phrase "coming out the closet", a term used to announce that one is homosexual.)

The prophecy forgot to mention this day,

(A prophecy is known to foretell outcomes, and there were several prophecies in the Harry Potter series. Dumbledore says that that the prophecy merely forgot to mention this day. It reference the main prophecy in Harry Potter and the Order of the Pheonix.)

When I knocked your ass back to Gandalf the Grey!

(Gandalf used to wear an all-gray attire before he reincarnated into a powerful, all-white-wearing wizard. Dumbledore says that he will beat him back to his less powerful state. He also does this physically, changing him to his grey wardrobe with his magic.)

Check your status: they call me headmaster; you're nothing!

(Dumbledore is the headmaster of Hogwarts, whereas Gandalf is only a wizard with no actual title or rank.)

Nice staff, you compensating for something?

(A rebuttal from one of Gandalf's lines, where Dumbledore says that Gandalf's staff size might be covering that his manhood is small.)

I prefer the company of wizards, and I'm proud of it!

(Wizards are males capable of using magic, as opposed to females, whom are witches. Dumbledore states he prefers to be around wizards, aka males, nodding to the fact that he is gay, and adds that he is proud of this fact, retorting back at Gandalf's insults at his sexuality. It also refers to a Gandalf quote from The Hobbit in which he says that Radagast "prefers the company of animals".)

You try to win your battles with two fat hobbits!

(Over the course of The Lord of the Rings trilogy, Gandalf travels with two hobbits, namely Frodo and Sam. While Gandalf's magic can be helpful at times, it is really the hobbits who do the dirty work. In other words, Gandalf does not actually win his battles if he has the hobbits doing most of the work.)

You think your hairy-toed friends are gonna harm me?

(Hobbits also have hairy feet, which is not a really intimidating factor. Dumbledore does not think they can hurt him anyways.)

Wait'll they get a taste of Dumbledore's Army!

(In Harry Potter and the Order of the Phoenix, Professor Dolores Umbridge, who was the Defense Against the Dark Arts teacher at the time, took up the seat as headmaster of Hogwarts and didn't allow the subject of defense at the school. Harry and his friends made a secret group known as Dumbledore's Army, or the DA, to practice Defense Against the Dark Arts, and they became skilled at it. Since the group was named after Dumbledore, he is sure they can beat Gandalf as easily as he can.)

Do not take me for some conjurer of cheap tricks!

(This quote is said verbatim by Gandalf to Bilbo Baggins at the beginning of The Fellowship of the Ring. He says that he has more powerful magic than Dumbledore and should not be taken lightly.)

I don't give a Fawkes about your Order of Phoenix!

I'll tie a new knot in your beard, with your wrinkly balls,

(Dumbledore had a knot tied in his beard. Like Gandalf, he is also very old, and the elderly have been known to have wrinkles, even in their testicles.)

For I am the one rapper to rule them all!

(A play on the phrase from The Lord of the Rings: "The one ring to rule them all." Gandalf says that his rapping skill will rule over others.)

Your spells are a joke, not funny ones either!

(For something to be a joke means that it is either a funny phrase or a failure of sorts. Gandalf's spells are not the funny kind, they're more of the failing kind. Dumbledore is known for being light-hearted and enjoying jokes.)

Mines of Moria? Ha! More like Mind of Mencia!

(The Mines of Moria is a setting in The Lord of the Rings books, in which Gandalf tried to lead the fellowship through. Mind of Mencia is a comedy television series, which was often criticized for having low-quality and unoriginal jokes,  so he says that Gandalf is laughable, which refers to his previous line in which he calls him a terrible joke.)

I'll Expecto my Patronum on your face, you little snitch,

(Expecto Patronum is a spell from the Harry Potter universe that conjures up an animal spirit from someone's happiness, used in defense against dementors. If it doesn't work, a blast of white will come out instead. A Snitch is a golden ball used in Quidditch. Dumbledore states that he will ejaculate with the white blast from his wand onto Gandalf's face.)

And when I'm finished, I'mma fly like it's Quidditch!

(A reference to Nice Peter's song, "Like It's Quidditch",[1] a parody of Far East Movement's "Like a G6". After this battle, he would soar like it's Qudditch, a sport in the Harry Potter series involving flying broomsticks.)

Retrieved from "https://epicrapbattlesofhistory.fandom.com/wiki/Gandalf_vs_Dumbledore/Rap_Meanings?oldid=1466370"
Community content is available under CC-BY-SA unless otherwise noted.