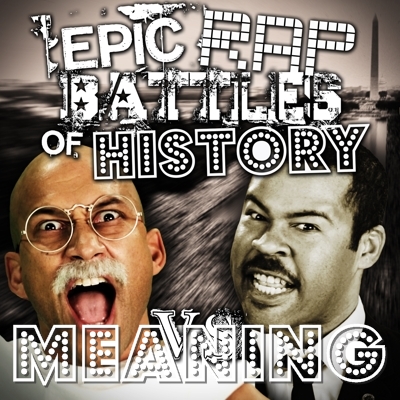 You want to battle wits? See who's a better pacifist?

(Gandhi and King were both pacifists, meaning they solved problems in non-violent ways. Since they both never used acts of violence to fight others, they will battle each other on who has the greater wits.)

I fought the caste system, but you still cannot touch this!

(Gandhi was against the Caste System, a system of division of labor in India, leaving him unemployed. Another meaning is that he's alluding to the untouchables, the lowest class in the caste system. It also references MC Hammer's one-hit wonder rap song, "U Can't Touch This".)

("Slumdog skillionaire" is a play on words to the film Slumdog Millionaire, a movie taking place in India. Gandhi did not have money, so he calls himself a skillionaire, rather than a millionaire, saying he has skills equivalent to the amount of money a millionaire would have. He was titled as Mahatma, which is Sanskrit for "Great Soul", meaning he was a saint to India, similar to a Messiah.)

(This is a reference to Dhalsim, the Indian character in "Street Fighter", and his signature move, Yoga Fire. Gandhi uses this to demonstrate how well he can spit out his hot raps.)

Everything you preach, I said it first!

(King used tactics against racial segregation that were based on Gandhi's. Gandhi is thus inferring that King was simply mimicking his actions.)

You should jot down these words, plagiarize my whole verse!

(King sometimes jotted down his thoughts on paper to fight for the civil rights of African-Americans. It's also said some paragraphs in his speeches may have been borrowed from other orators. Since King is just repeating Gandhi's work, he might as well copy Gandhi's verse and differentiate his phrases for his own verse.)

Leave your thoughts on the door like the real Martin Luther!

(Martin Luther King, Jr., born Michael King, Jr., had his name changed at the age of 5 by his father (Michael King, Sr., changed to Martin Luther King, Sr. at the same time as his son's name change), in honor of Martin Luther, a German monk and Catholic priest from the 16th century. Luther nailed his "The Ninety-Five Theses", a treatise against the practices of the Catholic Church, to a cathedral door as he returned to his hometown of Wittenberg, Germany. Gandhi is calling King arrogant, saying he should have left his thoughts behind as his namesake did.)

I'm not thinking you shall overcome this, Junior!

(Gandhi says that King will never win this battle. This is also a play on "We Shall Overcome", a pivotal spiritual hymn in the Civil Rights Movement, which itself was referenced in King's speeches. Junior refers to Martin's name, it is used as an insult by Gandhi who implies King even stole his name.)

I'm the King of civil rights from the city to suburbia!

(King is the best known black civil rights leader throughout the entire United States, in cities and suburbs, and he calls himself the "King" of civil rights, a pun on his last name.)

No shoes, no shirt, but I'm still gonna serve ya!

(This is a play on "No Shoes, No Shirt, No Service" policies at American restaurants which means that if you aren't wearing a shirt and shoes, restaurant staff can refuse to serve you food. Gandhi wore a robe and sandals, so that's neither shirt nor shoes, but King is willing to serve him with his raps rather than food. The word "serve" refers to when someone beats another person badly in a competition, usually a verbal one.)

Make you swallow your words so you can break the fast,

(Gandhi protested via a hunger strike, otherwise known as fasting. Making one swallow his words means owning them by having them take back what they said, so King is going to own him and break his hunger strike. This is also a play on words for Breakfast.)

Then thank God almighty you can eat at last!

(One of King's famous quotes came when segregation laws were struck down, saying, "Free at last, free at last, thank God almighty, we are free at last!" This still refers to the hunger strike, and once Gandhi eats his own words, he'll no longer be starved.)

I admire the way that you broke the British power,

(The Caste System had been in place for thousands of years prior to British control, but was exploited by the British regime as a means of control over India's people. Gandhi's movement effectively ended its use while overthrowing British Imperial rule. His actions left King awestruck which was a reason he had been influenced by Gandhi.)

But I have a dream that one day you'll take a shower!

(King uses the title of his famous speech, "I Have A Dream", to say that he wishes Gandhi would bathe. Gandhi never left the site of his hunger strike until the Caste System was destroyed, so he didn't shower often, much like many other Indians, some of which were unable to afford baths.)

Like the "H" in your name, you ought to remain silent!

(In the name Gandhi, the "H" is silent, making it sound like gahn-dee. Reference to the first of the "Miranda rights" recited to someone accused of a crime, "the right to remain silent," since anything he says can be used against him in court. King tells Gandhi to quit talking, or he'll use his own words against him.)

(King says he'll flatten him like a piece of bread with his rhymes. Naan is a type of flattened bread eaten in India, Pakistan, and Bangladesh, and King mixes in the word with non-violence, the type of methods he used to beat segregation.)

You would know about bread, Dr. Birmingham sandwich!

(This talks about two things: one is the campaign led by King in Birmingham, Alabama. The other is a shot at King's previous line, talking about bread. He makes a play on words combining Birmingham with ham sandwich, meaning Dr. King looks a bit portly from eating too much.)

Boycott those grits, sit in with some spinach!

(Grits are a cornmeal paste served as a warm cereal in the southern US, which King probably ate, since he was born in Atlanta, Georgia. Gandhi, as a vegetarian, suggests he swap those for spinach whilst referencing boycotts and sit-ins that were a staple of the Civil Rights era. This also refers back to the previous line about King's size, suggesting he try a better diet which includes spinach, a healthier food.)

With protests and women, the same advice goes:

(Gandhi gives some advice to King, explained in the next line.)

Always stay away from the ho's!

(This is a pun on hose/hoes. During the Civil Rights Movement, police would often spray water on protesters with high pressure hoses. This also means King should stay away from prostitutes, also known as 'easy women'. In addition, King engaged in multiple affairs, exploited by the FBI.)

I got so much street cred, they write my name on the signs!

(Many roads in America bear King's name, such as one major thoroughfare in Seattle, Washington, as well as multiple ones in the Southern US, namely Alabama and Georgia. King made a reputation of himself in his time, giving him "street cred" in more ways than one.)

I'd ring you for tech support, but I got a no bell prize!

(King slams Gandhi for being Indian since many Indians are found at the other end of a tech support line – the kind you call when a gadget misbehaves. It is also a pun on the Nobel Peace Prize, of which King holds an honor for his work on civil rights. Incidentally, Gandhi was considered for a Nobel Prize for his part in India's independence movement, but did not win because he had died or was dead in the year he was nominated. King says that he cannot ring Gandhi for tech support because he has a "Nobel" or "No Bell" prize.)

Nigga, we got more beef than one of your sacred cows,

("Nigga" is a ghetto term for a black person, and King calls Gandhi one. It is also ironic since "nigga" is derived from "n*****r", which is a slur considered racist towards African-Americans, and King, being an anti-racism activist, says this term. In rap culture, "beef" refers to a grudge that rappers have with each other. In Indian faiths like Hinduism, cattle are regarded highly and thus not eaten by followers, so King is stating that he and Gandhi have a very large grudge against each other during this rap. He also disses the fact that Gandhi and his followers worship cows.)

But I'm about to forgive you so hard right now!

(In spite of their differences, King acknowledges that he will forgive Gandhi, which, in turn, makes him the better pacifist.)

I am passively resisting the fact that you suck.

(Gandhi preached passive resistance, which is to resist non-violently. He opposes King with calm, despite thinking that King is inferior. Passively resisting refers to the name of the football team Gandhi started.)

I am celibate because I don't give a fuck!

(Celibacy refers to not having sex, often for spiritual/religious reasons. Gandhi was celibate, so "I don't give a fuck" means that since he doesn't have sex, he doesn't care (or give a fuck) about Martin Luther King.)

God taught us not to judge men by the color of their skin,

(King preaches the word of God to not judge people due to their race.)

But my momma told me not to stand downwind

(Despite believing in not judging someone due to race, King makes an exception for Gandhi and other Indians because of what his mother taught him…)

(…which is to not stand downwind of an Indian man because of their odor. Curry is a very spicy Indian food. King compares Gandhi's garbs to a diaper, otherwise calling him nude, then compares him to Yoda due to his old, wrinkled appearance and wisdom-filled speech.)

I have a dream that one day you'll put on pants!

(King refers to his "I Have A Dream" speech. King hopes that Gandhi would wear more clothes and appear more presentable.)

(King will rap against Gandhi in such a way that can be compared to his acts of protest: preaching, teaching, and protest marches.)

Any man with more than two teeth can out eat you!

(Gandhi went on hunger strike, and King uses this as a joke, saying that anyone with a decent amount of teeth could eat more than Gandhi.)

I'll call you for technical support, when I need it on my Nobel prize!

(This lyric is what developed into the lyric, "I'd ring you for tech support but I got a no bell prize!")

Brother, I know we got more beef than one of your sacred cows,

(This lyric is what developed into the lyric, "Nigga, we got more beef than one of your sacred cows!" According to Nice Peter, the line was changed because Key & Peele, who played Gandhi and King in the battle, respectively, insisted that saying "nigga" would 'the funniest edgiest thing [they] can do'[1].)

Boycott those carbs, sit-in on some spinach!

(This lyric is what developed into the lyric, "Boycott those grits, sit in with some spinach!")

Retrieved from "https://epicrapbattlesofhistory.fandom.com/wiki/Gandhi_vs_Martin_Luther_King_Jr./Rap_Meanings?oldid=1432785"
Community content is available under CC-BY-SA unless otherwise noted.