Gary Anthony Williams was born on March 14th, 1966, in Fayetteville, Georgia. He is an actor and voice actor, providing the voice of characters such as Uncle Ruckus on The Boondocks, Yancy Westridge in the video game Alpha Protocol, and Horace Warfield in StarCraft II: Wings of Liberty and StarCraft II: Heart of the Swarm. He appeared on the television series Weeds, Boston Legal, Blue Collar TV and as Abe Kenarban in Malcolm in the Middle. He starred alongside Cedric the Entertainer on the TV Land sitcom The Soul Man, has been a recurring guest on the improv comedy TV series Whose Line Is It Anyway?, and is a regular member of the live improv comedy show The Black Version. Off-screen, Williams is the co-founder and Artistic Director of the L.A. Comedy Shorts film festival in Hollywood, California. 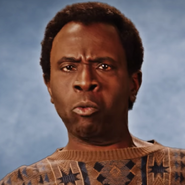 Williams as Bill Cosby
Add a photo to this gallery
Retrieved from "https://epicrapbattlesofhistory.fandom.com/wiki/Gary_Anthony_Williams?oldid=1449963"
Community content is available under CC-BY-SA unless otherwise noted.