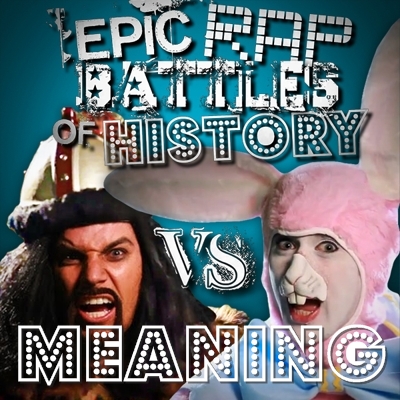 How you gonna battle? I invented hip hopping!

(Hip-hop is a music genre similar to rap. Since bunnies hop, the Easter Bunny says he was the one who created hip-hop; therefore, Khan should not try to battle him.)

My little tail swinging and my big ears flopping!

(Rabbits have small tails and large ears, both of which typically swing and flop around respectively while a bunny hops.)

The Easter Bunny, baby. I deserve to be arrogant!

(The Easter Bunny says that because he is nice and hard-working, he should be arrogant, or proud of himself.)

(Khan was known for appearing very brutal, raping a lot of women, having a barbaric attitude, and wearing a lot of pelts because of the cold weather in central Asia.)

Ooh, what you gonna do?

(The Easter Bunny does not think Khan can actually do anything to him and taunts him.)

You've got a bucket on your head and a fu manchu!

(Khan often wore a war helmet, which the Easter Bunny says looks like an upside-down bucket. A fu manchu is the type of mustache that Khan had.)

The Great Wall couldn't keep you out of China!

(The Great Wall of China is a large wall in China measuring over 21,000 kilometers (over 13,000 miles). It was built to keep barbarians out of China to prevent them from conquering it, but Khan still got past the defenses and took over China.)

Watch me rub my foot for luck and stick it right up your vagina!

(A rabbit's foot is considered to be good luck, and rubbing it "releases" some of the luck. The Easter Bunny says he will get lucky and win the battle, and he proceeds to say that Khan is not a real man and only has female sex organs. It is also further insulting for someone as feared and brutal as Khan to say he has a vagina, so the Easter Bunny taunts him more by saying he will kick him where it would hurt for a woman.)

(Khan laughs and tries to incite the Easter Bunny into violence.)

Your bunny ass about to feel the wrath of Khan!

(Khan says that he will wreak havoc on the Easter Bunny's ass. This also references the movie Star Trek II: The Wrath of Khan, in which the Khan from the title was the villain.)

(Rabbits' feet are said to be lucky charms, especially when rubbed, as stated in the Easter Bunny's last line. Khan says he will need more than that to win the battle. It also references Trix cereal commercials, with the catchphrase, "Silly rabbit, Trix are for kids!")

You've got two giant ears but can't hear that you suck!

(Rabbits have big, long ears, and Khan says that despite this fact, the Easter Bunny cannot hear that he sucks.)

I drive a Mongol horde; your army is weak!

(Khan is Mongolian, as are the massive armies, or hordes, he led. He also says the Easter Bunny is no threat for being too soft and feeble.)

What? You going to attack me with a posse of Peeps?

(Peeps are a marshmallow candy, mostly given out at Easter. Khan jokes at how this is no match for his group of warriors.)

I'll bite off your tail and punch your teeth down your throat,

(Khan claims that he has enough physical strength to bite off the Easter Bunny's tail and hit him hard enough to make his large teeth go right down his throat.)

Then butcher your family and make a new coat!

(In addition to the previous line, Khan threatens to skin the Easter Bunny's relatives and make himself a brand new coat out of their pelts.)

Take it easy, baby. No need for this meanness.

(The Easter Bunny begs for Khan to stop being so cruel, which is his normal behavior.)

We should keep it peaceful, homeboy, Jesus!

(The Easter Bunny requests peace once more to calm down Khan so that he does not become aggressive. Easter is a part of the Bible, in which Jesus plays a prominent part. Three Jesuses also appear when he says this: Jesus Christ, Jesus Quintana, and a man named Jesus.)

I give people candy. You just like to pillage.

(Easter is the time for giving candy to children. Khan only wants to steal innocent people's belongings.)

Why don't you get out of my face and go back to your village?

(The Easter Bunny tells Khan he should leave and go back to where he came from.)

From Poland to Korea, I ravaged the land!

(Khan invaded every village between the countries of Poland and Korea, which are far apart in distance.)

Now my DNA's in dudes from New York to Japan!

(During his invasions, Khan would rape women from the villages he and his army conquered. Because of this, he had many children who carried his genes. One in 200 people on Earth have the possibility of having Khan's DNA, which includes places which are normally crowded, such as New York and Japan, so there is a 0.5% chance of being related to him.)

Ha! Easter my ass, you're not in the Bible!

(Despite being a iconic character usually seen symbolizing the Easter holiday, which is in celebration of a focal point in the Christian religion, the Easter Bunny himself is obviously a fictional character, not even being mentioned by name or alluded to in the Bible itself.)

You're a fluffy bitch mascot for Hallmark in denial!

(The Easter Bunny is a mascot that represents Easter. Khan claims that the Easter Bunny was only created by Hallmark to sell Easter eggs and candies.)

Retrieved from "https://epicrapbattlesofhistory.fandom.com/wiki/Genghis_Khan_vs_Easter_Bunny/Rap_Meanings?oldid=1460322"
Community content is available under CC-BY-SA unless otherwise noted.