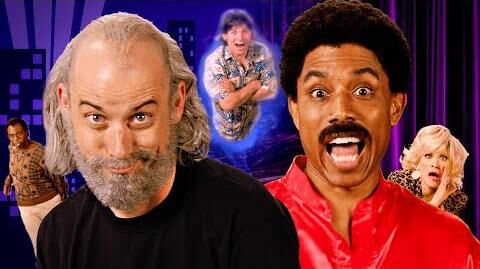 George Carlin vs Richard Pryor is the seventy-fifth installment of Epic Rap Battles of History and the fourth episode of Season 6. It features American stand-up comedians George Carlin, Richard Pryor, Bill Cosby, Joan Rivers, and Robin Williams in a stand-up comic battle royale. It was released on July 13th, 2019.

[Note: George Carlin is in gray, Richard Pryor is in red, Bill Cosby is in dark brown, Joan Rivers is in light brown, and Robin Williams is in blue.]

I was born in the Bronx and brought up in Harlem.

I'm dope at spitting bars and getting crowds hardy harring,

While you're the least threatening black dude since Carlton!

But this is the pissing fucking cunting Internet

Non-stopping brain droppings like my wit's got the shits!

So call this Pryor-rhea: I doo doo on you constantly!

No pauses in my punchlines, no commas in my comedy!

You'll be down for the count when this counter-culture counterman

Serves you with a stand-uppercut you can't counter, damn!

I'm Wilder than Gene when I'm killing a beat!

Any rap battles with you, I'll be winning 'em!

(Ooh!) It's ya boy from Peoria, Illinois!

'Cause ain't no set tighter in this whole damn game

Even the shit that I spit off the top: flames! (Stand up!)

My delivery is rupturing the tummies!

You tell a joke and people go, "Hmm, that's funny."

My mama was a prostitute and grandma ran the brothel!

Seen some shit but not as awful as your haircut debacle!

I'm the original brother (Hey!) to give the scene some color! (Hey!)

The most iconic stand-up comic! Stand down, motherfucker!

(Hey!) You forgot the Cos and you know it's a mistake!

I eat emcees for breakfast like they're made of chocolate cake!

Did somebody put something in my pudding?

Oh, shut up, you stupid son of a bitch, you know you blew it!

I'd have attacked you two first, but your hearts beat me to it! (Oh!)

So let me end you real quick like I was Hannibal Buress! (Ohh!)

It turns out you were just like your sweater: monstrous!

The men that I slept with only wished they were unconscious!

My sex jokes offend, you're on the sex offender registry!

Oh, who are you wearing now? Is that State Penitentiary?

Enough with the roofies, let me move on to Rufus.

My jokes always had bite, you started out toothless

And you just kept talking, you wouldn't shut up.

And Richard, can we talk? Can I call you Dick?

Like your fifth wife did when you remarried your sixth?

At this point, I've got more plastic than flesh,

But my Tupperware body couldn't keep your raps fresh!

(I think my pudding-)

So don't throw down with Rivers! The flow is too relentless!

I haven't thrashed celebrities this bad since The Apprentice!

I'm closing this battle! No one else compares!

The only place I'm in the middle is on Hollywood Squares!

I'm a genie in the bottle for some comic relief!

O Carlin, my Carlin, what can I say about you?

Mork aged backwards and Joan, you must too!

Yo Pryor, I Doubtfire makes a good shampoo!

Left you running down the street like "Oh, no!"

And believe me, we've all hit plenty of bumps.

(Yeah!) But now I've got the Flubber flows that'll get the club jumping!

You got second-hand raps. "Found 'em Good Will Hunting!"

Got more hair on my arms than a Monchhichi!

I love the prince, but you'll never have a friend like me!

Thanks folks, that's my time! Gotta set myself free!

I’m the golden glove champion of this shit

It doesn’t get more iconic black comic than this

Thoughtful’s what they say after you go up

You’re right, I guess words change, we used to just say “you suck”

You look like an extra from Grumpy Old Men

You always make the lists of stand-ups near the top

But your movies ended up like your cheeks: flops!

I'm headlining this battle! No one else compares!

And yo Pryor, I Doubtfire makes a good shampoo!

Lit yourself up and ran down the street like "Oh, no!"

And the road ain't been easy, we've played plenty of dumps,

But I got the Flubber flows that'll get the club jumping!

You got second-hand raps. "Hey we found these Goodwill Hunting!"

That's my time now watch me set myself free!

But you couldn’t hold a candle to my success if you were granted three wishes!

But don’t hold candles Richard, we all know what happens then!

There’s a sweetness to comedy that all of you lack

And weird for me to end this battle with that

George Carlin vs Richard Pryor. ERB Behind the Scenes