The go-go dancer, alongside Manny Stixman and Gillian Shagwell, made a group cameo appearance as part of Ming Tea in James Bond vs Austin Powers. She was portrayed by Sulai Lopez.

The go-go dancer is a member of the fictional band Ming Tea from the Austin Powers film franchise. She appears in the psychedelic transition stages throughout the movies, dancing and playing music with Austin Powers. She is portrayed by Lana Antonova in the franchise.

The go-go dancer appeared throughout Austin Powers' first verse. She could be seen dancing, playing drums and guitar, and messing around with Powers, similar to the way she did in his movies. 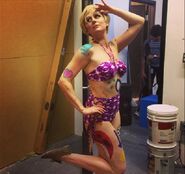 A picture of the go-go dancer posted on Sulai Lopez's Instagram account
Add a photo to this gallery
Retrieved from "https://epicrapbattlesofhistory.fandom.com/wiki/Go-Go_Dancer?oldid=1324355"
Community content is available under CC-BY-SA unless otherwise noted.