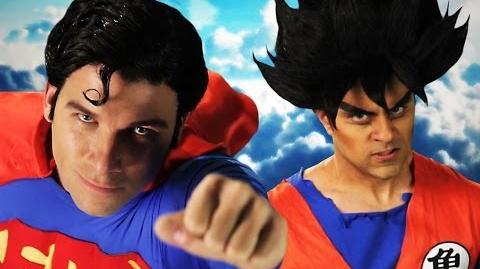 Goku vs Superman is the forty-first installment of Epic Rap Battles of History and the eighth episode of Season 3. It features the main protagonist of the Dragon Ball manga and anime, Goku, rapping against the eponymous protagonist of his DC comic series, Superman. It was released on May 19th, 2014.

[Note: Superman is in blue, Goku is in orange, Jimmy Olsen is in light coral, and Krillin is in dark orange. Goku and Krillin speaking at the same time is in regular text.]

Who can stop this constipated jock,

With the awful animation and the complicated plot?

Who's got the rap bombs to drop on Japan?

This looks like a job for the OG! Superman!

I'm killin' it; you're Krillin it! I'm villainous to vegetables

Who dance around in hammer pants that hide their tiny genitals!

My level is incredible! I'm out of your league!

You want justice? I'll bust this nut up in your Chi-Chi!

With one breath, I'll freeze your whole measly species!

You're primitive and limited. You live in a village of idiots!

How many times are they gonna rewrite your story?!

Your powers have been boring since the nineteen fucking forties!

Goku! Defeat me with heat beams? You're crazy,

'Cause I'm a Super Saiyan! You're a flying Miss Daisy!

You're pretty pasty to be powered by the sun!

You can't flow to Son Goku; I Kaio-ken get it done!

When I see your movies, all I do is watch the clock,

'Cause there's nothing fun about a superhero scared of green rocks!

Look at those panties! (Oh!) You got that camel toe!

I'll report to Lois Lane and Superman that ho!

(Ha ha!) Your rapping is weaker than your fight scenes!

Just one punch and over nine thousand screams!

From Z to GT, you can Dragon Ball deez!

Don't lecture me about fights, you caped coward!

You got your ass beat by a bat with no powers!

There's only one way that this battle's gonna end: 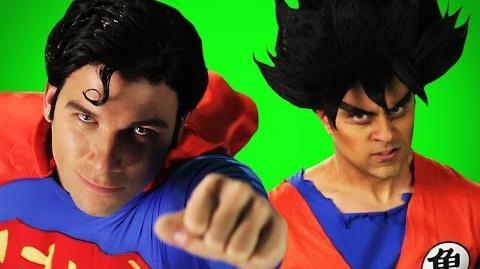 Goku vs Superman. Behind the Scenes of Epic Rap Battles of History. 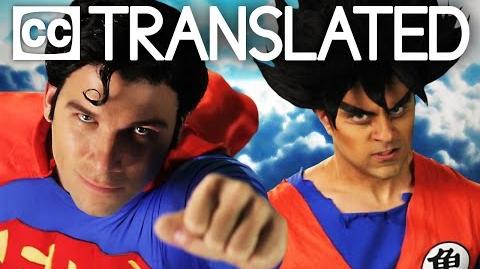