Gordon James Ramsay, OBE was born on November 8th, 1966, in Johnstone, Scotland, and was raised in Stratford-upon-Avon, England. He is a chef, restaurateur, actor, television personality, and author. His restaurants have been awarded 16 Michelin stars in total and currently hold 9. He is also the first Scottish chef to achieve 3 Michelin stars.

In 1995, he was awarded "Newcomer of the Year" at the prestigious Catey Awards, an Oscars-like event for the restaurant and hotel business. He then went on to receive "Chef of the Year" in 2000, as well as "Independent Restaurateur of the Year" in 2006. In 2013, he was inducted into the Culinary Hall of Fame. In 2015, Forbes listed Ramsay's earnings at $60 million for the previous 12 months, and ranked him the 21st highest earning celebrity in the world.

[Note: Gordon Ramsay is in light orange, while the blue team is in regular text.]

And that's how you make a perfect risotto.

I've got exactly two minutes, and you should be grateful

'Cause I'm in the fucking weeds with all these shows to pitch!

I keep my ovens preheated and my pilots green-lit!

I'm a seasoned skillet; you're a PAM-sprayed pan!

I got Michelin stars; you're like the Michelin Man!

I'm rolling in dough like beef wellington from hollering,

And I'm shitting on you like I'm whack-flows intolerant!

I'm glad you got that off your giant, flabby chest!

I'd call you a donkey, but you look more like Shrek!

When the Iron Man chef busts a rhyme,

I'll open up on you like a fine red wine!

I'm a culinary innovator; you're no creator!

I'm fresh; you're past your expiration date!

I've seen your little show, and it sure ain't pretty!

You can't test me with your fatty recipes!

Call your book Mastering the Art of Heart Disease!

Tell me, who the fuck (yes, chef!) wants to learn to cook calf brains?!

You call these rhymes raw? (No, chef!) They're stale and soft!

Now, here, take this jacket… Now, give it back and fuck off!

[Note: Gordon Ramsay is in light orange, while Jean-Philippe Susilovic is in regular text.] 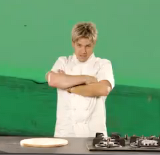 Hell's Kitchen's response to the battle