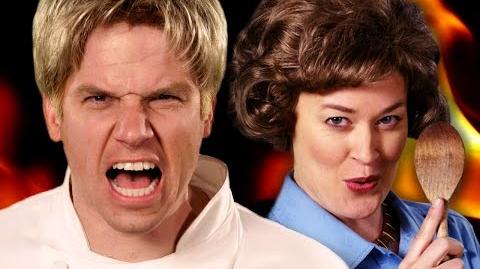 Gordon Ramsay vs Julia Child is the sixtieth installment of Epic Rap Battles of History and the second episode of Season 5. It features Scottish-born British chef and television personality, Gordon Ramsay, rapping against culinary PBS television host, Julia Child. It was released on May 18th, 2016.

Pebbles as herself (cameo)

[Note: Gordon Ramsay is in light orange, Julia Child is in light blue, and the blue team is in blue.]

And that's how you make a perfect risotto.

I've got exactly two minutes, and you should be grateful

'Cause I'm in the fucking weeds with all these shows to pitch!

I keep my ovens preheated and my pilots green-lit!

I'm a seasoned skillet; you're a PAM-sprayed pan!

I got Michelin stars; you're like the Michelin Man!

I'm rolling in dough like beef wellington from hollering,

And I'm shitting on you like I'm whack-flows intolerant!

Oh, isn't that a wonderful thing?

A grumpy little chef who thinks he can bring

Enough stuff to justify getting rough

With the butter-loving queen of the Bourguignon Boeuf!

I rock hard as concrete on top of these bomb beats!

Been chopping the pommes frites since you sucked on your mom's teats!

I served America dutifully, and I slice lard beautifully!

I reign supreme from shark repellent to charcuterie!

Go on and cross your arms in that B-boy stance!

When it comes to haute cuisine, there's one F-word: France!

You couldn't rap your way out of a pastry bag, understand me?

I laugh and create; you berate and destroy,

But fear, my dear boy, is less scrumptious than joy!

I'm glad you got that off your giant, flabby chest!

I'd call you a donkey, but you look more like Shrek!

When the Iron Man chef busts a rhyme,

I'll open up on you like a fine red wine!

I'm a culinary innovator; you're no creator!

I'm fresh; you're past your expiration date!

I've seen your little show, and it sure ain't pretty!

You can't test me with your fatty recipes!

Call your book Mastering the Art of Heart Disease!

Tell me, who the fuck (yes, chef!) wants to learn to cook calf brains?!

You call these rhymes raw? (No, chef!) They're stale and soft!

Now, here, take this jacket… Now, give it back and fuck off!

Concede, I've got this in the bag: sous-vide!

But as a person, you couldn't get a star on Yelp!

I could freeze a steak with those frosted tips!

What's with that bitter taste in every word from your lips?

You scream at women, but the fits that you're pitching

Make you the pissiest bitch in the kitchen!

I'll pat you on the head, melt you, and stick it to ya!

Oh, I'm so glad you spent this time with me!

[Note: Gordon Ramsay is in light orange, Julia Child is in light blue, and Jean-Philippe Susilovic is in gray.]

Ooh! Isn't that an adorable thing?

A grumpy cruel chef who thinks he can bring

With the original queen of the bourguignon boeuf!

I rock harder than concrete on top of these bomb beats!

I've been chopping up pommes frites since you sucked on your mom's teats! 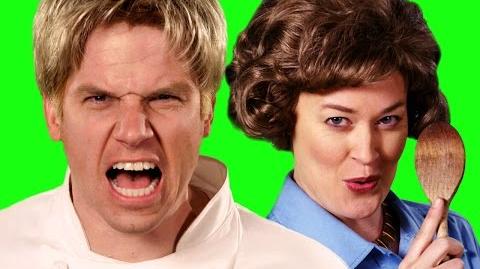 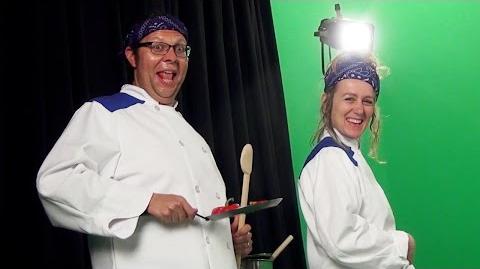 Gordon Ramsay vs Julia Child - Behind the Scenes of Epic Rap Battles of History pt.2