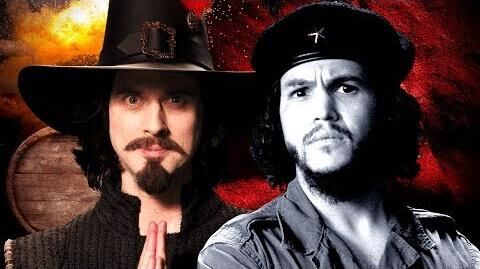 The Palace of Westminster undercroft

Guy Fawkes vs Che Guevara is the seventy-third installment of Epic Rap Battles of History and the second episode of Season 6. It features Argentinian revolutionary, Che Guevara, rapping against British attempted terrorist, Guy Fawkes. It was released on May 4th, 2019.

[Note: Che Guevara is in green, while Guy Fawkes is in dark red.]

Ill rhyme-slayer from the '60s era!

Me and my guerrillas are a squad of killers! (Hoo!)

You're famous 'cause of Alan Moore's third best book!

All the children say, "We will be like Che!"

Asthmatic, but I'll take your breath away. (Gasp!)

You tried to rebel against James the first.

Here's a tip for your next plot: try to rehearse!

I've got my face on a magnet on your roommate's fridge.

Your head is on a spike up on London Bridge!

You had one job, cabrón: to strike a matchstick!

Got caught with a fuse like your bars: not lit!

You should have stayed anonymous, Epic Fail Guy.

Treat this battle like the gallows, and take another dive.

Sucks? Guy, you died for the Catholics:

A group with a bad "touching little boys" habit!

I'm the hardest Marxist ever graced a banknote!

You're an error-prone terrorist! Penny for the scapegoat!

All the people say, "We will be like Che!"

You had one job, Guido: to light a matchstick!

A group with a bad "touching little boy" habit!

It must be V for very bad hat!

Che Guevara vs Guy Fawkes. ERB Behind the Scenes