Dr. Hannibal Lecter is the main character of several novels by Thomas Harris, first seen in Red Dragon, and has been in many movie adaptations, most notably the Academy Award-winning film The Silence of the Lambs, starring Sir Anthony Hopkins as Lecter. He is a forensic psychiatrist who also happens to be a cannibalistic serial killer. He is best known for his iconic "muzzle" mask.

In The Silence of the Lambs, the imprisoned Lecter helps detective Clarice Starling, whom he has a benign affection for, catch serial killer Jame Gumb, known as "Buffalo Bill", in exchange for a transfer to a different prison, from which he promptly and violently escapes.

You haven't mentioned me once in your entire battle rap.

Quit jacking off on the track and put the lotion in the basket,

Rhymes finer than the chianti I would pair with your liver! 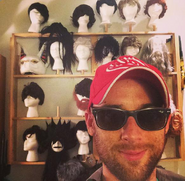 The muzzle mask by Nice Peter's neck
Add a photo to this gallery
Retrieved from "https://epicrapbattlesofhistory.fandom.com/wiki/Hannibal_Lecter?oldid=1475699"
Community content is available under CC-BY-SA unless otherwise noted.