Harry Houdini was born on March 24th, 1874, in Budapest, Hungary (then known as the Austro-Hungarian Empire), under the name Erik Weisz. His grand illusions and daring, spectacular escape acts made him known worldwide as one of the most famous magicians of all time.

Around 1883, nine-year-old Erik began to pursue an interest in magic. As a stage name, Weisz became Harry Houdini by adding an "i" to the last name of his idol, French magician, Robert Houdin. At 17, Houdini left his family to pursue his magic career. By the age of 20, Houdini had been performing small acts throughout New York, and soon joined a circus where he began to develop and perfect his escape tricks.

Through the years, Houdini gained fame after repeatedly escaping from police handcuffs and jails. He was even given certificates from various wardens for escaping from their prisons. After making his name in America, Houdini toured Europe, where he expanded his repertoire by escaping from straitjackets and coffins. Eventually, Houdini was able to accomplish his dream of having a full show dedicated to his magic. He had help from his stage assistant, who would later become his wife, known as Bess Houdini.

In the 1920s, Harry Houdini became interested in the occult, specifically in debunking mediums and psychics. His training in magic helped him expose frauds that scientists and academics could not. He chronicled his time investigating the occult in his book, A Magician Among the Spirits.

In 1926, Houdini attempted a stunt in which university student J. Gordon Whitehead would strike him in the abdomen, and Houdini would feel no pain. Unfortunately, Houdini was unprepared and his appendix was ruptured during the stunt. Houdini refused to seek medical help and continued to travel, eventually succumbing to peritonitis on October 31st, 1926, at the age of 52.

[Note: Harry Houdini is in gray, while Criss Angel is in regular text.]

You've never seen a body quite the same as that of Houdini!

You're not a challenge, David!

So abracadabra, you billowy bitch!

Man, you look like a pirate on the Las Vegas strip!

I'm swallowing needles and spitting out evil; you couldn't escape from a flash paper bag!

I'm badder with patter and matter of fact, you can't match all my skill if you sawed me in half!

(Ah!) Your hack of a Bob Saget-y act is embarrassing!

You're the saddest thing to happen to Magic since The Gathering!

I'm hanging by my ankles; from a crane, I dangle!

I got lox on my bagel that you couldn't handle!

And you can't hide shame with a camera angle!

Did somebody say Angel? No. Oh…

You look like a skinny pirate off the Las Vegas strip!

And that hair, are you really for real?

You should change your stage name to David Cockatiel!

You couldn't break your way out of a flash paper bag!

You couldn't match up to my skill if you sawed it in half!

Let me give you something you just don't understand:

You're like a magic Bob Saget and I'm a fucking crazy man!

That are smaller than the ones you spray tan in!

I'm hanging in chains off of cranes and things.

I put my life on the line every time I step in the lime light.

I rhyme right, Magic Mike, you can't even lock down a wife!

And when I smack you in the face it won't be a "sleight of hand"!

Rhymes are as sharp as the part in my hair (Ahhh!)

Hanging 180 from cranes like a hundred and eighty feet up in the air!

I'm Harry Houdini! Holla if you see me!

Meanwhile your act's so embarrassing it's staggering,

The whackest thing that's happening in Magic since The Gathering!

I hang out on cranes chained to with ankle strained straitjacket on.

You hang out with Carrot Top and Celine Dion!

It's something you couldn't understand:

You're a cheerful kind of showman;

Houdini inside the magician's crate

A poster on the wall of Houdini's background; it reads, "Nothing can hold Houdini"

Houdini in a straitjacket 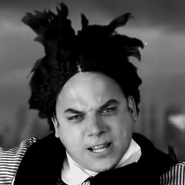 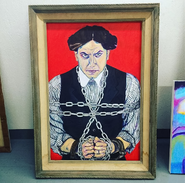 A painting of Houdini by Sulai Lopez
Community content is available under CC-BY-SA unless otherwise noted.
Advertisement