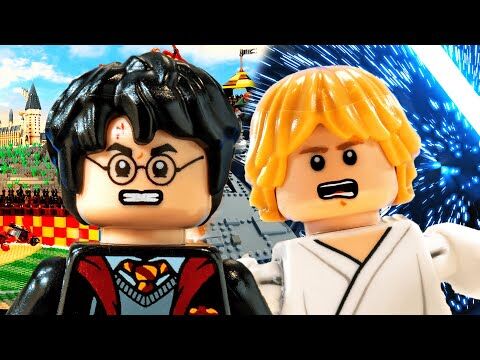 [Note: No live action was used in this rap battle. All characters were portrayed by Lego Minifigures. Because of this, they only required voice actors.]

[Note: Harry Potter is in red, Luke Skywalker is in tan, Han Solo is in brown, R2-D2 is in italics, Ron is in blue, Fred is in orange, George is in purple, and Yoda is in green.]

Accio mic! Let me fire up the wand.

Like Hermione and Ron I'm about to get it on!

Even the mad eye of my man Alastor Moody

Could see your franchise only has two decent movies.

Search your feelings: do you sense déjà vu?

You're gettin' smoked like your Uncle Owen and Aunt Beru!

Your acting is flat and your raps are 2D too!

Bugger off to the afterlife where you're fat and see-through!

You're the biggest letdown in your series since Snoke

It makes sense your father's Vader; all you do is choke!

You country bumpkin, you must be dumb!

Who farms moisture on a desert planet with two suns?

Let me stick my plans in your Dusty Bin droid.

I'll leave you like a Horcrux: split up and destroyed!

I don't know who made you shoot first, but that missed.

If I was you I'd have a bad feeling 'bout this!

(Ooh) I'm a rhyming Jedi like my father before me.

Your talking hat shoulda put you in Gryffin-dorky!

Your origin story is mostly stolen from me!

You might be Potter, but Harry, I planted your seed!

Suddenly gets taken under wing of funky wizard dude,

Learns that he's been destined to have powerful gifts,

But between the two of us I think I got the cooler stick! (Swing it!)

My mic-saber cuts through you so slicey!

Leave you on the floor like an arm at Mos Eisley!

Hit you with the Wampa raps, I get icy!

I fly the X-Wing to save a planet from massacre,

You fly a broom like some kind of magical janitor!

Your Dumble-dweeb army likes to think that you're the best.

All you did was use your mom like a bulletproof vest!

The death of my mother saved the wizarding race,

Your mum died of heartache when she saw your face!

You swamp school dropout! You're too whiney to rhyme.

At least when I Slytherin a sister, she isn't mine! (ooh!)

I'm the boy who lived, a bestseller without equal!

I'll split you like your fanbase's feelings 'bout the prequels!

The sequels brought you back to meet your demise.

I'd say you were brilliant, but I must not tell lies!

You let J.J. compact your character to trash!

So go on, try and force more of your disses.

You're like a Stormtrooper: 'cause all your shit misses!

[beep boop beep] That’s right, R2 It does sound like he left all his fire in the goblet.

[boop beep beep] Haha! Maybe he will get rescued by an anorexic hobbit.

I think it's pretty clear that you and I are pretty different:

My drive's hyper, your drive's Privet!

I've got more rhymes than sand grains on Tatooine!

You couldn't pull in the win with a tractor beam!

I crushed an empire a galaxy large!

I blew up the Death Star; you blew up Aunt Marge!

I'll pop you where Poppy Pomfrey can't be healing you.

Unlike a great disturbance in the Force, I'm not feeling you!

Death would eat you up without Hermione and luck.

Because your own skills Wingardium Levio-suck!

And I’d rather herd nerfs than have to endure your third verse!

Have you heard rap before? That was not dope at all!

Maybe have Goldieballs show you the protocol!

But I bet you're just distracted, you got a lot on your plate.

On one hand the rebellion, on the other hand- oh wait...

I roll deep and the Weasleys got my back!

This muggle sucks more hole than the bloody sarlacc!

We'll rough you up good if you try to step to Harry, mate!

You're the least intimidating twin since Mary-Kate!

You can find me getting fantastic on these beats!

It's over Luke! I got the high ground advantage!

You should have Hagrid fly you home on his moped.

If I wanted teenage wizardry I'd call Selena Gomez!

My attack tactics are galactically hardcore,

I learned flow from the best in the biz! Get funky!

So of you, the end this is! Maclunkey!

My Jedi mind tricks put the nix on your Imperius!

Twist you up like death sticks, I'm Bellatrix: dead Sirius!

No need to Expelliarmus, you're harmless in a duel.

Call me the Hogwarts Express: I just took you to school!

Harry Potter vs Luke Skywalker. ERB Behind the Scenes