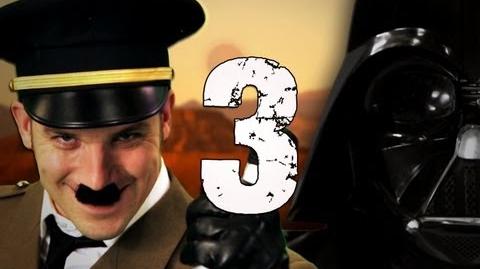 Hitler vs Vader 3 is the thirty-fourth installment of Epic Rap Battles of History and is the first episode of Season 3. It features Star Wars character and villain, Darth Vader, rapping against Nazi leader and German dictator, Adolf Hitler, for the third and supposedly final time. It was released on October 7th, 2013.

[Note: Hitler has emerged from the Rancor Pit, into which he fell at the end of the previous battle. He is seen standing at an encampment near the Great Pit of Carkoon with speeders flying past and a sarlacc below. As a group of past ERB rappers man the speeders, Abe Lincoln can be seen carrying an axe to drive Hitler off of the platform, while Stephen Hawking is on a ship facing them. Vader is also on the ship, observing Hitler, who is about to be thrown in.]

Vader, this is your last chance! Battle me…or die!

[As Lincoln commands Hitler to move forward, Hitler gives a nod to Lando Calrissian. Lando gives a nod back, and Hitler looks up to see Stephen Hawking preparing to launch a microphone at him. Lincoln then makes Hitler walk into the sarlacc pit, but he pretends to fall in and vaults back onto the platform. Hawking then throws the mic over to Hitler, beginning the battle.]

Let me paint you a picture, son:

Portrait of a bitch after World War I!

You were stirring up the fears of the German people,

Tellin' the world that the Jews are evil!

You wrote a little book, got 'em fired up,

Had a Beer Hall Putsch, got 'em fired up,

And when your bunker started getting fired up,

You put a gun in your mouth and fired up!

When you conquer Russia, better pack some fucking winter clothes!

While you're fighting off Valkyrie,

I got a million clones; they die for me!

My bounty hunters ride for me.

Yo homeboy, finish this rhyme for me!

They call me Boba Fett; you wanna mess with me?

I'll put my balls in your mouth like boba tea!

I got a jetpack, yo; you know I steal the show!

'Cause when I rock a microphone—

[Boba Fett lets out a Wilhelm scream as he is shot off the screen by Hitler.]

I am Adolf—! *lightsaber sound*  Hitler…

You're a far cry from beating me with that desert butthole in carbonite,

I have friends from Hugo Boss all the way to IKEA, 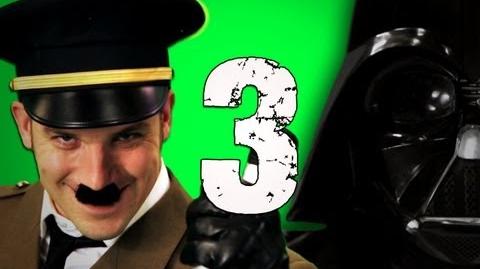 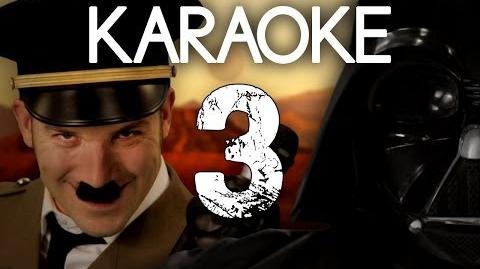 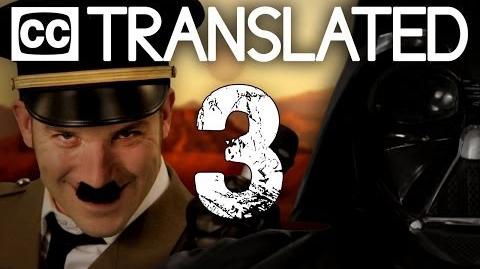