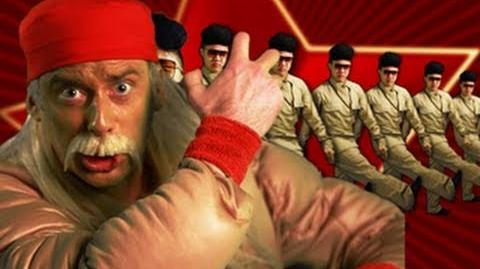 Born 2 Be A Ball Playa

A re-edited version of the battle (made by Javi Sánchez-Blanco) was released on May 25th, 2019, with new backgrounds and effects.

The name's Kim Jong. I got a license to IL!

Make you swallow my rhymes like a steroids pill!

With a walrus mustache and a wack bandana!

I'm coming at you like the Asian Ric Flair!

Bitch, I'll suplex you by your friggin' dick hair!

Your whole fam's a bunch of Barbies, dude!

You're a freak, a phony, a rice-a-roni jabroni!

I'm gonna bounce you like a check for my alimony!

Beijing is in China, you blond asshole!

I'm a god amongst men; you're a suburban commando!

North Korea, bitch! Let me give you a tour!

By the way, your wife says my dick is bigger than yours!

I don't know if he can finish the battle!

He's reaching for the ropes!

On behalf of the entire World Wrestling Federation!

(NOTE: All these errors have been fixed in the re-edit.) 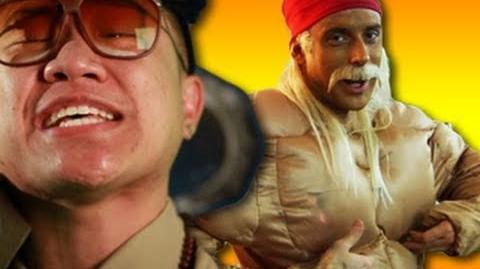 Epic Rap Battle 5 - Behind the Scenes