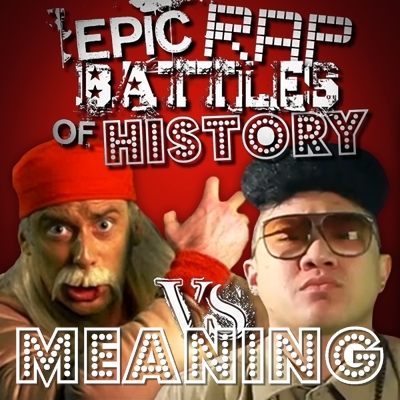 The name's Kim Jong. I got a license to IL!

(Kim Jong-il introduces himself with several plays on words. First, License to Ill is also the name of the debut album by the hip-hop group Beastie Boys. Second, if someone is ill, it means their raps are good. Third, he is finishing his name, and finally he is making a pun on "license to kill". Similarly, Kim is saying he will defeat Hulk Hogan with his rapping.)

Make you swallow my rhymes like a steroids pill!

(Kim is saying Hogan is obviously on steroids and he's going to swallow his rhymes like he's swallowing the pills. It is perhaps also a play on the phrase "bitter pill to swallow" meaning to accept or admit to something you don't want to.)

(Hogan was infamous for his slick appearance as well as the bright yellow tankshirts he wore during his wrestling career. He would often rip these shirts in half as a show of force to his opponents. Kim says Hogan looks like a banana, a yellow fruit whose skin peels off in a similar manner to Hogan's display.)

With a walrus mustache and a wack bandana!

(Hogan sports a mustache that resembles that of a walrus's whiskers, and always wears a bandana on his head.)

I'm coming at you like the Asian Ric Flair!

(One of Hulk Hogan's biggest rivals in wrestling was Ric Flair. Kim says that he is coming for Hogan like Flair.)

Bitch, I'll suplex you by your friggin' dick hair!

(Suplex is a wrestling move. Kim says he is going to do this with Hogan's pubic hair.)

Your whole fam's a bunch of Barbies, dude!

(Hogan and his family all have blond hair, including wife Linda and daughter Brooke. Kim insults them all by saying that the two women look like Barbie dolls.)

(A beef means a fight, or conflict, and since beef is usually served in BBQs, Kim is about to give Hogan some beef, or a fight. In particular, Korean restaurants and Korean-style food served in the United States is often described as "Korean barbecue," as it's made up of meats marinated in Korean sauces then seared on a grill. Many Korean BBQ places actually have grills at the table, so the customers can watch their food being cooked or, at their discretion, cook it themselves. Several of the most famous Korean barbecue dishes, like Bulgogi or Galbi, are beef.)

(Hogan is saying that Kim has a seat right next to the ring for his own defeat. He also often ends his sentences saying "brother". This is also a reference to SmackDown, the Thursday night wrestling program created by the WWE.)

(Kim Jong-il is known for having a rather bizarre hairstyle, which Hulk Hogan says reminds him of Sonic, who has similar hair. Hulk also calls him Sonic's mother, further insulting him.)

You’re a freak, a phony, a rice-a-roni jabroni!

("Freak" and "phony" mean weird and a fake, respectively. Rice-a-Roni is a boxed instant rice side dish that Kim might eat, being Asian; rice is grown in Asia and is featured in many Asian diets. "Jabroni" is Italian slang for "dumbass", and another definition of it is a word used by wrestlers as "a wrestler who loses in order to make another wrestler look good", often called a "jobber".)

I’m gonna bounce you like a check for my alimony!

(Hogan frequently bounces checks (not enough money in his account, illegal) for his divorce. An alimony is to provide financial support to one's spouse after being divorced, so he often bounces his checks.)

(Hogan is telling Kim to fight him, or "come on"; Hogan refers to his fans as "Hulksters".)

(Hogan says he's going to hang Kim by the ropes like people do with puppets in puppet shows, or the ropes on the wrestling rings. The line is a reference to the movie Team America: World Police, made by Trey Parker and Matt Stone, the creators of South Park, which features puppets. Kim is the antagonist in the film. There is a rumor that North Korean diplomats tried unsuccessfully to get the movie banned or even pulled from worldwide release.)

(Kim held an American news reporter, Laura Ling, hostage in North Korea. A choke hold is a wrestling move, and Hogan will use it to keep Kim hostage like he did to the journalist.)

(A leg drop is a move where a wrestler knocks their opponent down in the middle of the mat, runs at full speed into the ropes, bounces off them, then uses the momentum to throw themselves in the air, landing with their leg landing across the opponent's neck or upper body. Ironically, the move is designed to injure an opponent and prevent them from moving, allowing for the pinfall, though Hogan here claims the move would give Kim so much momentum he would be knocked all the way "back" to Beijing, which Hogan mistakes for a North Korean city, since the stereotype is that most Asians come from China. The leg drop is Hogan's finishing move, and therefore is considered the most devastating wrestling move Hogan could deploy against Kim. This makes Hogan's apparent lack of understanding of how the move works additionally ironic.)

Beijing is in China, you blond asshole!

(Kim corrects Hogan on his previous line, saying that he doesn't come from China. It is a stereotype that blond women are stupid, so Kim is calling Hulk both stupid and effeminate.)

I’m a god amongst men; you're a suburban commando!

(Kim's family believes that its members are gods ruling over the people of North Korea. Kim also references the 1993 film starring Hogan, Suburban Commando, known for its negative critical reception and absurd plot.)

North Korea, bitch! Let me give you a tour!

(At the time of the video, Kim Jong-il was the dictator of North Korea. He says he'll show him around to get his act together.)

By the way, your wife says my dick is bigger than yours!

(Kim disses on Hulk's manhood and sex life. He's saying that Hogan's wife is cheating on him with his opponent. Also, Asian men are stereotyped as having small penises; Jong-il is saying that Hulk's is even smaller than his, possibly from the steroids he took.)

Hulk Hogan goes down! I don't know if he can finish the battle! He's reaching for the ropes! It's…it's…Macho Man Randy Savage!

(In tag team wrestling, when one wrestler is too badly hurt or worn down to effectively continue to wrestle, he can tag in his tag partner if he can reach his own corner. At that point, the other team can't beat the first wrestler even if they pin him, and the fresh wrestler is free to continue the match. Macho Man Randy Savage spent a significant amount of time as Hulk Hogan's tag partner in the tag team "The Mega-Powers," which headlined Wrestlemania IV and then (after the inevitable split-up) "exploded" in a Hogan v. Savage match at Wrestlemania V.)

("Oh, yeah" is a phrase that Macho Man used a lot. He's saying that the battle is about to get serious.)

(Macho Man appeared in TV adverts for Slim Jim jerky, telling people to "Snap into a Slim Jim!" In the commercial, he snapped the Slim Jim in half, and he plans on doing the same with Kim.)

(Kim Jong-il wears glasses and Macho Man says that it would be unfair to punch such a small weakling. Dictators like him are also usually smaller than most people, such as Hitler or Napoleon.)

(Kim was also very short, almost midget-like. Even though Macho Man prefers not to hit little people, he'll do it anyways if someone like Kim tries to show him up.)

(Macho Man believes that no one compares to him.)

(Under his rule, a famine occurred in North Korea, resulting in 3.5 million deaths. Kim supplied his people with one meal a day, which was one reason he was typically viewed as a bad leader.)

("Punk!" was one of Macho Man's catchphrases. The elbow drop was a wrestling move that Randy Savage used to finish the match. He claims he'll do it on all of Kim Jong-il's nation.)

On behalf of the entire World Wrestling Federation!

(He'll elbow drop Kim Jong-Il for all the wrestlers in the league.)

(Macho Man repeats his famous catchphrase to conclude the battle.)

(This lyric is what developed into the lyric, "Punk, I'll elbow drop your whole nation!" Macho Man calls Kim Jong-il a Smurf as an insult toward his height.)

(This lyric is what developed into the lyric, "On behalf of the entire World Wrestling Federation! Oh, yeah!")

Retrieved from "https://epicrapbattlesofhistory.fandom.com/wiki/Hulk_Hogan_and_Macho_Man_vs_Kim_Jong-il/Rap_Meanings?oldid=1463864"
Community content is available under CC-BY-SA unless otherwise noted.