John Ronald Reuel Tolkien CBE FRSL, better known simply as J. R. R. Tolkien, was born on January 3rd, 1892, in Bloemfontein, South Africa. He was an English writer, poet, philologist, and university professor who was the author of several books taking place in the world of Middle-earth, most famously in the Lord of the Rings trilogy. His works are widely regarded as some of the most well-known amongst the fantasy genre and has led him to be considered to be the father of modern fantasy literature, or high fantasy. He died at the age of 81 on September 2nd, 1973, in Bournemouth, United Kingdom. 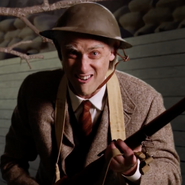 Tolkien and Led Zeppelin
Add a photo to this gallery
Retrieved from "https://epicrapbattlesofhistory.fandom.com/wiki/J._R._R._Tolkien?oldid=1470469"
Community content is available under CC-BY-SA unless otherwise noted.