Jack the Ripper is the nickname given to an infamous unidentified serial killer who terrorized the streets of the Whitechapel district in London from 1888-1891. During these years, eleven murders took place, of which five can almost certainly be attributed to the killer. The victims in question are known as the "canonical five", and consist of prostitutes Mary Ann Nichols, Annie Chapman, Elizabeth Stride, Catherine Eddowes, and Mary Jane Kelley. A portion of the killer's fearsome fame comes from the brutality of their deaths; bodies found eviscerated, disemboweled, and with a kidney missing, of which Jack claimed to have consumed. During the same period, the police and several media outlets received letters from someone who claimed to be the killer, taunting them with details about how the murders were committed. The name "Jack the Ripper" originates from a letter he allegedly wrote that is known as the 'Dear Boss' letter.

A majority of Jack the Ripper's infamy comes from the fact that his true identity is still unknown to this day. The study and analysis of the Ripper cases came to be known as "ripperology", and hundreds of theories about the identity of the Ripper have been conjured. Many people have been suspected of being the fearsome killer, including artist Walter Sickert, Prince Albert Victor, and Polish immigrant Aaron Kosminski. However, even modern claims are being doubted, and the true identity of Jack the Ripper has remained a mystery for more than a hundred years and still is today.

Oi, mate, pass the liquor! It's Jack the Ripper!

Jack the rapper, following you way before the dawn of Twitter!

I'm a human trigger warning, through the night until the morning.

When the light shines upon my crimes, you find it sick, appalling!

This is horrorcore. Beware if you're a common whore,

Or at late night you may find me knocking on your door!

Not keen to leave until I'm knee-deep in blood and gore!

Your grieving family on their knees, weeping, scrubbing floors!

The police need a lead; they dunno what they're looking for!

My raps are like the way I eat my meat: bloody raw!

While you only exist inside the pages of a novel!

You were kept for ages in a hovel,

Contained within a cage behind a locked door while I never got caught,

So who's the superior serial killer, Doctor Lecter?

So God protect ya from the Hell I've spread upon us! 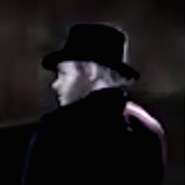