Jacques-Yves Cousteau, AC was born on June 11th, 1910, in Saint-André-de-Cubzac, France. He was a naval officer, explorer, conservationist, filmmaker, innovator, scientist, photographer, author, and researcher who studied the sea and all forms of life in water. He co-developed the Aqua-lung, pioneered marine conservation, and was a member of the Académie française; however, he is perhaps best known for inventing the self-contained underwater breathing apparatus (SCUBA).

Cousteau described his underwater world research in a series of books, perhaps the most successful being his first, The Silent World: A Story of Undersea Discovery and Adventure, published in 1953. Cousteau also directed films, most notably the documentary adaptation of the book, The Silent World, which won a Palme d'Or at the 1956 Cannes Film Festival, making him the first person to win a Palme d'Or for a documentary film.

Palme d'Or-winning documenter of the ocean,

You're chunky and soft, you get on my nerves!

You're the only manatee I don't want to conserve!

My Life Aquatic was adventure and beauty,

I'm so cool, Bill Murray played me in the movie.

I have Oscars! You're in Dr. Dolittle 2!

So run back home to your daddy's zoo!

And just to be clear, 'cause I'm no veterinarian,

Were you killed by a fish kids pet at the aquarium?

Talk about sons? Better watch what you say now!

You almost turned yours into Outback Mistake House!

Enough of your antics and madness!

You're a joke of a bloke in a tacky khaki romper!

And named after you; I'll eat them with butter!

Hold the 'dee', I'm Crocodile Dun with you! 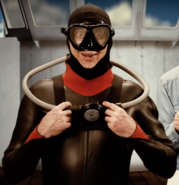 Retrieved from "https://epicrapbattlesofhistory.fandom.com/wiki/Jacques_Cousteau?oldid=1473870"
Community content is available under CC-BY-SA unless otherwise noted.