This article is about the member of Team Rocket featured in Pokémon. For other uses, see James (disambiguation).

James made a cameo appearance alongside Jessie as a part of Team Rocket in Ash Ketchum vs Charles Darwin. He was portrayed by Dante Cimadamore.

James (Japanese: コジロウ Kojirō) is a member of Team Rocket, more specifically part of a trio with Jessie and Meowth, who follows Ash Ketchum everywhere on his journey in order to steal his Pikachu. He has also appeared alongside Jessie in the Yellow version of the Pokémon game franchise as bosses.

James has shown to be relatively well versed in various activities, including Pokémon Haiku, Pokémon Orienteering, and PokéRinger. It is possible that he developed his skills during his temporary separation from Jessie, or even from the many lessons he was enrolled in as a child. James also had an odd, somewhat submissive personality. He would regularly comply to whatever ideas Jessie or Meowth came up with, and when he does not, James usually ends up doing so regardless. He also very affectionate of his Pokemon, being very protective of his Chimecho and Mime Jr., has a loyal Growlithe at his family home, and he also recieved a Koffing for Christmas which was his signature Pokemon for a while that evolved into a Weezing. A running gag in the show is that his grass Pokemon like Victreebel, Cacnea and Carnivine would show him affection in a way that hurts him such as biting his head. In each episode of the Pokémon anime they appear in, he, Jessie, and Meowth get flung away saying, "We're blasting off again!", when they are defeated.

James, alongside Jessie, appeared in Ash Ketchum's first verse during the line, "When it's time to train, I turn to Pikachu!" When he says the line, "But when I need a weak verse, I choose you!", Team Rocket can be seen sneaking behind Ketchum and attempting to capture his Pikachu. At the end of the line, Pikachu thunder-shocks the two, causing them to "blast off" and briefly appear behind the HMS Beagle as they launch to the sky.

A preview of James, Jessie, Pikachu, and Ash Ketchum 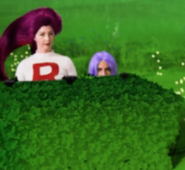