Created by British author Ian Fleming, Commander James Bond is a Senior Operational Officer of the 'Double-O' ('00') Branch, an ultra-covert Black Ops unit within the British Secret Intelligence Service (MI6). As an agent of MI6, Bond holds code number "007". The 'double-O' prefix indicates his discretionary license to kill in the performance of his duties.

In film, James Bond was first portrayed by the late Sir Thomas Sean Connery, beginning with 1962's Dr. No. He would subsequently appear as Bond in the films From Russia with Love (1963), Goldfinger (1964), Thunderball (1965), You Only Live Twice (1967), and Diamonds Are Forever (1971), before leaving the role, which would then go to the late Roger Moore, beginning with 1973's Live and Let Die. A few months after the release of the film Octopussy (1983), which Moore starred in, Connery returned to the role for the last time in the unofficial James Bond film, Never Say Never Again, another adaptation of the Bond story Thunderball, before Moore returned to the role. Twenty-two years later, Connery also provided his voice and likeness for the 2005 video game adaptation of From Russia with Love. Many film reviewers and critics often consider Connery's portrayal to be the most iconic.

An impersonation of Connery by Darrell Hammond was shown on Saturday Night Live's recurring scene Celebrity Jeopardy, where he would often prank Alex Trebek (Will Ferrell) and imply that he had sexual relations with Trebek's mother.

In addition to Connery and Moore, actors who have portrayed Bond include George Lazenby, Timothy Dalton, Pierce Brosnan, and, most recently, Daniel Craig.

[Note: James Bond (Daniel Craig) is in blond, James Bond (Sean Connery) is in gray, and Austin Powers is in regular text.]

I've beefed with Le Chiffre and No and Blofeld with the cheek scar,

But they were not as crooked and rotten as your teeth are!

I'll go balls to the Walther on this wack twat in an ascot!

Blast shots atcha like gas from the back slot of a fat Scot!

Permission from the Crown to put a scoundrel down? I've earned it!

I'm licensed to kill; you couldn't get a learner's permit!

Your third movie died; guess You Only Live Twice!

Spell my name! The ladies wanna B on D!

Any sex appeal you might have is beyond me!

I'm bespoke from my head to my toe, and after this flow, I'm done!

I only need one round: Golden gun!

(Ugh!) I can't believe I'm wasting my time with this clown!

I should be on an island with a fucking model by now!

Not rapping against Swedish penis-pumping weenies!

I didn't say I was finished! I'm sick of your silly gimmicks!

I'm the best spy in the business; just ask all the critics!

And I've been through hell, so yeah, I'm a bit of a cynic,

But I'm the original model that your frilly ass mimics!

I wouldn't exactly call you original…

It's the most prominent dominant bomb spy, so pay homage!

Handing out ass-whippings, I'm on some real James Bondage!

Your performance doesn't stir me, and I'm certainly not shaken!

If I wanted shitty acting in my action film, I'd go and watch Taken!

I see your modern gadgets, and I piss on them all!

I don't need a Q to break your balls!

I'm the granddad of the brand millions of fans have been sold on!

You're so far up on my nuts I should call you Bond. Gold Bond.

Rap these, you velvety hack! Jeez!

It's the movie business, and you've had your six!

The world has had quite enough rug-wearing misogynists!

If they made a Mini-Me, they'd have to cast Peter Dinklage!

Or maybe they should cast a Bond who's actually English!

Why, pussy, aren't you the cunning linguist?

As a matter of fact, I've got a knack for licking old cunts!

After I beat you, I'll kick the shit out of the man who does your stunts!

I'm all in! I'm ready to die any day that you want!

When I rap against Pussy Galore's, I become a cunning linguist

Get off my nuts! What are you, Gold Bond?

Quit jacking my style, dude! You need to hold on.

The only thing allowed on my nuts is Gold Bond.

Without me, the show never goes on!

You're on my nuts so much, I should call you Gold Bond! 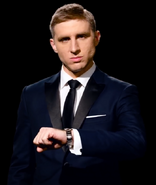 Craig's Bond in a suit

Connery's Bond in a playsuit