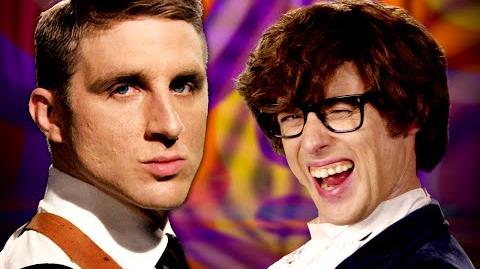 James Bond vs Austin Powers is the sixty-second installment of Epic Rap Battles of History and the fourth episode of Season 5. It features British Secret Service agent, James Bond, rapping against International Man of Mystery, Austin Powers. It was released on June 14th, 2016.

[Note: James Bond (Daniel Craig) is in blond, Austin Powers is in dark blue, and James Bond (Sean Connery) is in gray.]

I've beefed with Le Chiffre and No and Blofeld with the cheek scar,

But they were not as crooked and rotten as your teeth are!

I'll go balls to the Walther on this wack twat in an ascot!

Blast shots atcha like gas from the back slot of a fat Scot!

Permission from the Crown to put a scoundrel down? I've earned it!

I'm licensed to kill; you couldn't get a learner's permit!

Your third movie died; guess You Only Live Twice!

Spell my name! The ladies wanna B on D!

Any sex appeal you might have is beyond me!

I'm bespoke from my head to my toe, and after this flow, I'm done!

I only need one round: Golden gun!

You look a lot more blond in your movie, baby.

(Yeah!) Basil Exposition told me this would be boring,

But Jesus, man, even my mojo's snoring!

I mean, you can't shag properly with that waxed tush!

Birds flock to the musk of my chest bush!

(Yeah!) I'll hypnotize you with a little striptease,

And then judo chop; I'm swinging on you like the sixties!

(Yeah!) You're defenseless; my rhymes can't be deflected!

You're like all the sex I've ever had: unprotected!

(Yeah!) People want a hero with a little personality!

No one wants to sit through your gritty reality!

You made Thunderball two bloody times!

I'm one of a kind; you're always getting remade!

(Ugh!) I can't believe I'm wasting my time with this clown!

I should be on an island with a fucking model by now!

Not rapping against Swedish penis-pumping weenies!

I didn't say I was finished! I'm sick of your silly gimmicks!

I'm the best spy in the business; just ask all the critics!

And I've been through hell, so yeah, I'm a bit of a cynic,

But I'm the original model that your frilly ass mimics!

I wouldn't exactly call you original…

It's the most prominent dominant bomb spy, so pay homage!

Handing out ass-whippings, I'm on some real James Bondage!

Your performance doesn't stir me, and I'm certainly not shaken!

If I wanted shitty acting in my action film, I'd go and watch Taken!

I see your modern gadgets, and I piss on them all!

I don't need a Q to break your balls!

I'm the granddad of the brand millions of fans have been sold on!

You're so far up on my nuts I should call you Bond. Gold Bond.

It's the movie business, and you've had your six!

The world has had quite enough rug-wearing misogynists!

Yeah, to be honest, you are a bit rapey.

If they made a Mini-Me, they'd have to cast Peter Dinklage!

Or maybe they should cast a Bond who's actually English!

*slap* Why, pussy, aren't you the cunning linguist?

As a matter of fact, I've got a knack for licking old cunts!

After I beat you, I'll kick the shit out of the man who does your stunts!

I'm all in! I'm ready to die any day that you want!

There's no competition in a battle of best looks.

You're too clean; you look like you bleach and wax your tush!

I love your outfit baby, that'd go nice with my bed

Especially that shag rug you've got on your head

Is that all, have you had it?

I think Q should have made you a rapping gadget

I'm not impressed by your suit or those groovy shoes

You look like you escaped an episode of Scooby-Doo

When I rap against Pussy Galore's, I become a cunning linguist

Get off my nuts! What are you, Gold Bond?

Quit jacking my style, dude! You need to hold on.

The only thing allowed on my nuts is Gold Bond.

Without me, the show never goes on!

You're on my nuts so much, I should call you Gold Bond!

While I save the UK, you spoof me with goofy silly stuff

The way you treat your women is simply despicable

My car's the tits. Could call my Aston Martin Dolly Parton.

Your teeth look like someone pissed on a whiter picket fence

My member will never be as desensitized as your audiences 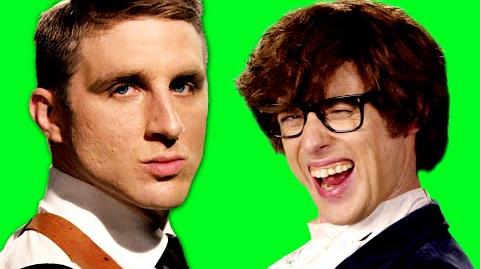 James Bond vs Austin Powers - ERB Behind the Scenes 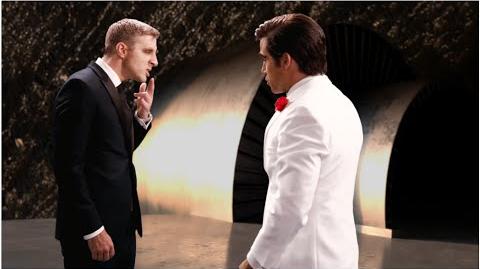 James Bond vs Austin Powers - Deeper Behind the Scenes 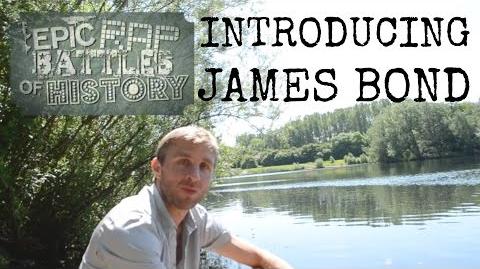 James Bond in the Epic Rap Battles of History 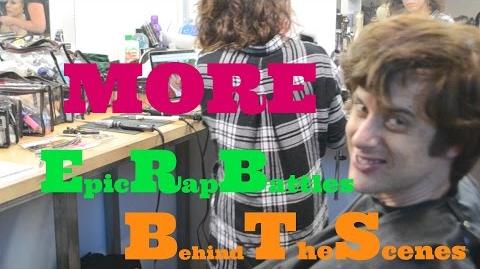