Jeff Bezos battled Mansa Musa in Jeff Bezos vs Mansa Musa. He was portrayed by EpicLLOYD.

Jeffrey Preston Bezos was born on January 12, 1964, in Albuquerque, New Mexico. He is the founder and executive chairman of Amazon, where he previously served as the president and CEO. With a net worth of almost $200.1 billion, he was the wealthiest person in the world (according to Forbes and Bloomberg's Billionaires Index) until November 2021, where he was overtaken by Elon Musk.

Born in Albuquerque and raised in Houston and Miami, Bezos graduated from Princeton University in 1986. He holds a degree in electrical engineering and computer science. He worked on Wall Street in a variety of related fields from 1986 to early 1994. Bezos founded Amazon in late 1994, on a cross-country road trip from New York City to Seattle. The company began as an online bookstore and has since expanded to a wide variety of other e-commerce products and services, including video and audio streaming, cloud computing, and artificial intelligence. It is currently the world's largest online sales company, the largest Internet company by revenue, and the world's largest provider of virtual assistants and cloud infrastructure services through its Amazon Web Services branch.

The first centibillionaire on the Forbes wealth index, Bezos was named the "richest man in modern history" after his net worth increased to $150 billion in July 2018. In August 2020, according to Forbes, he had a net worth exceeding $200 billion. In 2020 during the COVID-19 pandemic, Bezos' wealth grew by approximately $24 billion.

[Note: Bezos is in gray, while Amazon Alexa is in regular text.]

At Amazon, our product research is phenomenal,

I'm hotter than the soundtrack to Battlestar Galactica!

I serve more people on the web than Spider-Man!

You rap like a soccer mom; that's why you roll with Caravans!

You're about to taste some of that salt that you traded!

What's the long-term play in giving your wealth away, eh?

'Cause now I feed your whole country for the price of a cup of coffee per day! (Ha ha!)

So bow to me like you did to the king of Cairo!

You're about as hack as Saudis tapping my iPhone!

You'll be more ashamed than when you accidentally killed your mom

When I make you shit your pants worse than Diapers.com!

If I wanted to waste my life on desert spice, I'd watch Dune!

Earning every penny back only took me a month!

I went from Hobbit dork to slick orc physique!

3 years to trek to Mecca, man, you must be tripping!

One click, I'll get you there overnight, with free shipping! (Hahahahahahahaha!)

You couldn't even hit top tier in Civ VI!

Your ship has sailed just like the dude who came before you!

'Cause you ain't Fire, can't hold a Kindle to me!

I got the Flywheel flows! I revolutionized delivery!

Alexa, what do we have that he lacks? Skills. (Hahahaha!)

And now I'm here to flex my winning streak on 'Mr. T antique'! 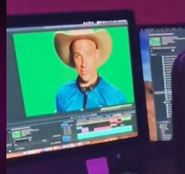 A preview of Bezos on Tiktok 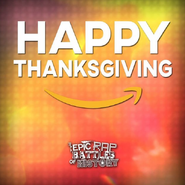 The Amazon logo on a promotional image celebrating Thanksgiving.