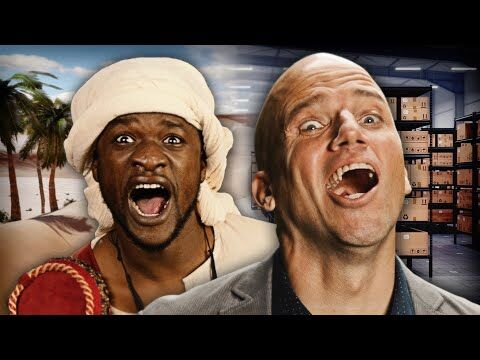 Jeff Bezos vs Mansa Musa is the eighty-fourth installment of Epic Rap Battles of History. It is unconfirmed whether this battle is the first or second episode of Season 7. It features the famously wealthy ruler of the Mali Empire, Mansa Musa, rapping against the founder of Amazon and one of the richest men in the world, Jeff Bezos. It released on November 27th, 2021.

Nice Peter and Josie Ahlquist as themselves

EpicLLOYD as himself and Captain Kirk (reused footage)

[Note: Mansa Musa is in red, Jeff Bezos is in gray and Amazon Alexa is in blue.]

Wallah, by the holy Quran I lay my hand upon,

Amazon, burn it down like when they put the cattle on

The hottest on the map since the Atlas of Catalan!

The King of Mali, with gold bars you can't escape from!

Lyrically, I pack heat! You pack a tape gun!

I left footprints in the Sahara; I know hot tracks!

I bust dorks like dot-com bubbles when I hit 'em!

Here's a nugget of advice to get your union problems handled:

I expanded horizons with libraries and mosques

While you chopped off the top of all the mom and pop shops!

All you widened was the gap between the haves and have-nots!

Now they're ordering or living in your cardboard box!

At Amazon, our product research is phenomenal,

I'm hotter than the soundtrack to Battlestar Galactica!

I serve more people on the web than Spider-Man!

You rap like a soccer mom; that's why you roll with Caravans!

You're about to taste some of that salt that you traded!

What's the long-term play in giving your wealth away, eh?

'Cause now I feed your whole country for the price of a cup of coffee per day! (Ha ha!)

So bow to me like you did to the king of Cairo!

You're about as hack as Saudis tapping my iPhone!

You'll be more ashamed than when you accidentally killed your mom

When I make you shit your pants worse than Diapers.com!

Ayo, Lex Loser, you look like a villain at Comic-Con!

You gettin' ate up; you should've battled me on Ramadan!

A harem of women is what I had on my staff!

You married one woman, Jeff, and she cut you in half! (Shink!)

(Haha!) David Pecker picked a pack of your peter pics!

Now your new girl got them "Feed me, Seymour" lips!

And it turns out, her own brother was the snitch!

Now let me really break it down because there's more to him!

He ain't a Bezos! His real name is Jorgensen! (Ha!)

But Daddy loved unicycles more than him,

So he rolled out! Now that's a Blue Origin!

Take one small step towards a different prophet

'Cause these days, you're just as cocky as your rocket!

If I wanted to waste my life on desert spice, I'd watch Dune!

Earning every penny back only took me a month!

I went from Hobbit dork to slick orc physique!

3 years to trek to Mecca, man, you must be tripping!

One click, I'll get you there overnight, with free shipping! (Hahahahahahahaha!)

You couldn't even hit top tier in Civ VI!

Your ship has sailed just like the dude who came before you!

'Cause you ain't Fire, can't hold a Kindle to me!

I got the Flywheel flows! I revolutionized delivery!

Alexa, what do we have that he lacks? Skills. (Hahahaha!)

I went from pip-squeak geek to gym-freak physique!

And now I'm here to flex my winning streak on 'Mr. T antique'!

Jeff Bezos vs Mansa Musa. Behind The Scenes. Epic Rap Battles Of History