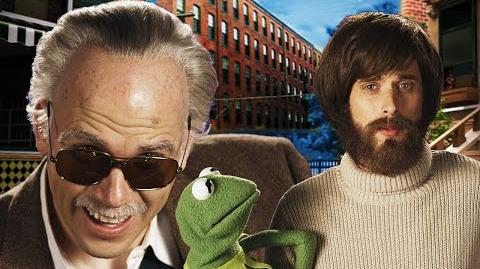 Jim Henson vs Stan Lee is the fifty-seventh installment of Epic Rap Battles of History and the twelfth and final episode of Season 4. It features Marvel comic book writer, Stan Lee, rapping against puppeteer and mind behind the Muppets, Jim Henson, along with his main Muppet, Kermit the Frog, with a surprise appearance by cartoonist and entrepreneur of his eponymous company, Walt Disney. It was released on August 3rd, 2015.

Nice Peter as Jim Henson and Kermit the Frog (voice)

Mary Doodles as the animators (cameo)

[Note: Stan Lee is in gray, Jim Henson is in tan, Kermit the Frog is in green, and Walt Disney is in purple. Additional voices are in regular text.]

It's the mind behind the Hulk against the geek beneath the Fraggles!

Whose raps are as dark as my shades; leave you squealing like "MEMEMEMEME!"

You're in trouble now, Jimmy, you dirty old hippie!

Your beard needs a little bit of snikt, damn skippy!

Heck, that face on your neck ain't sexy!

You're one part Sweetums, the other part Skeksis!

Step up to Lee and you get your butt kicked!

Your muppet Snuffleupagus stuff is bupkis!

I broke Ferrigno and the Comics Code,

So keep your frog and pig show moving right along down the road!

I'm glad you got that out. That anger can clutter your mind.

But you're a creative man, Stanley (yeah), so let's just leave it behind

'Cause I can sense your tension once the verbal fencing starts commencing.

There is no defense against the dents Jim Henson is dispensing,

And I'm clenching all your strings like you're a puppet in suspension.

Call your superhero friends in. Yeah, 'cause you're gonna need Avenging.

Let me mention: I'm impressed by all the vision that it took

For you to sign your name on all of Jack Kirby's comic books.

Nice try, frogman, but Jack was a friend of mine! (THWIP!)

That was a low blow. He did his own Thing, and now you've made it clobbering time! (SPLONK!)

Oh, you taught children to count and spell,

Then you taught your own kids how to drop your wife harder than you flopped on SNL!

I'm telling you, Henson! You wouldn't like me when I'm angry! I'm a marvel of a party pooper!

I'll snap your turtleneck like a Doozer stick and put you out to pasture like Mr. Hooper!

Honestly, there's a lot of things that you can't control at my age,

But the truth is, I miss ya. You were gone too soon.

Most of the Internet thought that you died 12 years ago,

The words you wove within the hearts of heroes are indelible.

There is no beef between us. We're two minds of the same kind,

And there is no man who could ever muck with what we've left behind.

M-I-C! I rock the mic properly!

The Disneyland-lord of your intellectual property!

So get back to work! That's my dime you're wasting!

I didn't buy you for billions so you could play around debating!

(Ha!) You belong to Disney, which means you stay busy

Artists begging me to stop; I won't let 'em!

Labor conditions in my shop? I don't sweat 'em!

With only three circles, I dominate the planet!

(Ha!) Clearly, there's nobody near me!

I'm owning this battle! In fact, I own this whole series!

So hop on my Steamboat, boys, but don't rock it!

I'll put a smile on your face and green in your pocket!

You'll be safe and insured when you're under my employ!

Now, look at it! Gaze upon my empire of joy!

You knew your game with the ladies wasn't so super 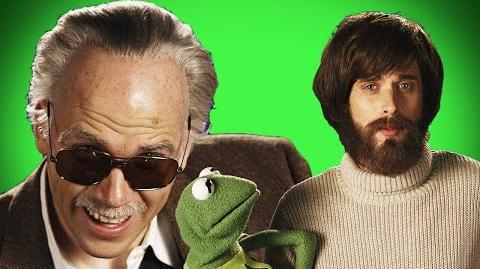 Jim Henson vs Stan Lee. Behind the Scenes of Epic Rap Battles of History 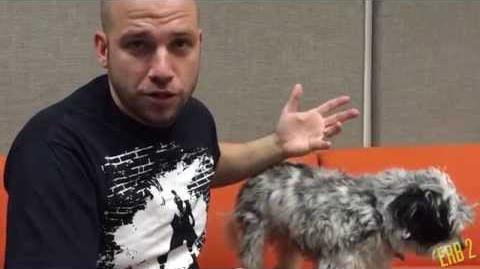 Jim Henson vs Stan Lee. Behind the Scenes of Epic Rap Battles of Hisotry pt. 2 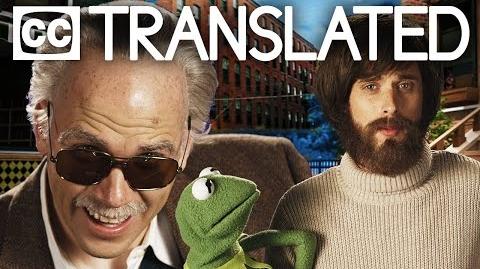