Joan of Arc battled Miley Cyrus in Miley Cyrus vs Joan of Arc. She also made a cameo appearance in Lewis and Clark vs Bill and Ted. She was portrayed by Jessi Smiles on both occasions.

Joan of Arc, or Jeanne d'Arc in French, was born on January 6, 1412. She was a French heroine noted for her bravery during France's Hundred Years' War against England, followed by her trial and execution at the stake after capture by English forces in 1431.

Born to a peasant family in northeastern France, as a teenager Joan had suffered firsthand the consequences of the Hundred Years' War. At around age twelve, Joan claimed to have had contact with three saints in a vision that told her to drive the English out of France, in the name of God. A short time after, she joined a French garrison and passed as a man through enemy lines. From there, she began a campaign to retake occupied France. This included the dissolution of a 1429 siege at Orleans in nine days, and the capture of Reims later in the year that made possible the crowning of Charles VII.

Following a sortie in which she was ambushed by French rebels siding with England, Joan was imprisoned at the English fortress of Rouen, where she would be tried in 1431 and convicted for acting against the Catholic Church as a heretic. She was sentenced to burn at the stake, and was executed on May 30 of the same year. More than twenty years after her death, Pope Calixtus III retried Joan after the war ended, at the behest of parties close to her. In 1456, the Pope exonerated Joan of heresy and declared her a martyr, leading to her blessed beatification in 1909 and full sainthood in 1920, which was almost 500 years after her death. Joan remains influential in modern culture, both in France, and elsewhere, with influence felt across television, film, art, music, and even in video games.

Joan of Arc, alongside Abe Lincoln, Genghis Khan, and Ludwig van Beethoven, appeared briefly at the end of Bill & Ted's first verse, during the line, "Or you'll discover your Corps most triumphantly stomped!"

Lord, forgive me for the words I speak.

I know the voices of the angels tell me turn the other cheek,

But I'm about to rip Hannah Montana's tongue out through her teeth!

When it comes to bad bitches, I'm the patron saint,

But I only get down on my knees when it's time to pray!

I came to Frenchmen's aid in their time of need,

'Cause I'm the maid of Orleans. You're the Mardi Gras beads, honey.

My father taught me things your daddy couldn't teach ya.

Your highest calling was a text from Wiz Khalifa!

You gotta die for something, Miley. Just picture your epitaph:

"Had the world watching, chose to show them all her flat ass!"

Do not take the Lord's name in vain, you ratchet skank!

Your manager's riding you to the achy breaky bank!

Be thankful for your talent; don't just rub it on your crotch!

Keep your party in the USA. Vive la France!

I know the…voices told me turn the other cheek.

But I only get down on my two knees when it's time to pray!

I can't help but bring the heat, I'm a human firebomb.

Miley Cyrus ripping a photo of Joan of Arc 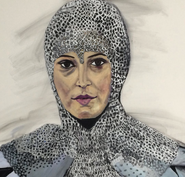 A painting of Joan of Arc by Sulai Lopez

Bill & Ted with all historical characters, including Joan of Arc, and Rufus in a scrapped scene
Community content is available under CC-BY-SA unless otherwise noted.
Advertisement