Johann Sebastian Bach made cameo appearances in Justin Bieber vs Beethoven and Nice Peter vs EpicLLOYD. He was portrayed by EpicLLOYD on both occasions.

Johann Sebastian Bach was born on March 31st, 1685, in Eisenach, Germany. He was a composer, organist, harpsichordist, violist, and violinist of the Baroque Period. He enriched many established German styles through his skill in counterpoint, harmonic and motivic organization, and the adaptation of rhythms, forms, and textures from abroad, particularly from Italy and France. Bach's compositions include the Brandenburg Concertos, the Goldberg Variations, Mass in B minor, two Passions, and over three hundred cantatas. His compositions are commonly revered for its artistic beauty and intellectual depth. After being exposed to Bach's music, Ludwig van Beethoven described him as the "Original Father of Harmony". Bach died at the age of 65 on July 28th, 1750, in Leipzig, Germany.

Appearances in the rap battles

Bach first appeared after Beethoven said the line, "Ask Bach: I've got more cock than Smith and Wesson!" At this point, Bach was holding his arms far apart to show how big Beethoven's phrase was, and appeared again after Beethoven said, "You wanna trade blows? You can't even hit puberty!" At this point, he put his fingers close together to show Justin Bieber's "manhood" representing that of a little child's.

Bach appeared next to EpicLLOYD during the line, "Then leak to YouTube your middle name is Alexis!" 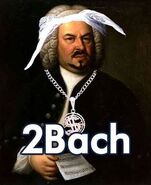 The image of "2Bach"