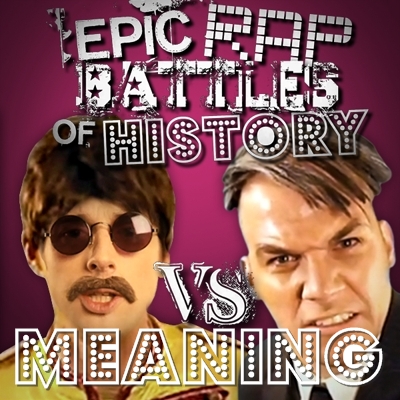 Help! You're making my ears bleed! You need a muzzle!

("Help!" was the title of a song and a film by the Beatles, the band that rose John Lennon to fame. Here, he says that O'Reilly yells too much and needs help because of it. To "make one's ears bleed" is to be loud and/or obnoxious enough to be offensive to that person. Lennon is so annoyed by his opponent that he'd prefer to have him silenced with a muzzle, as would be used on a loud dog, or one with a history of attacking unprovoked.)

Why are you pissed off all the time? Didn't your mum give you a cuddle?

(In the early days of The O'Reilly Factor, O'Reilly gained notoriety for yelling at guests whose views he did not agree with. Lennon says that this is probably because O'Reilly and his mother were not very close. Lennon, being an influential figure of the 1960s, was a pacifist who believed that "love conquers all".)

You're the type of guy who could die of a heart attack just in the shower!

(As angry as O'Reilly can seem at times, that sort of anger can induce dangerously negative stress and cause the heart to beat erratically, increasing the risk for heart attack. A shower is meant to be something that you should be able to relax in, but Lennon says that even in the shower O'Reilly would still be stressed and irate enough to induce a heart attack.)

You need to chill out for a minute and smoke weed for an hour!

(Lennon was known for drug usage, including marijuana, or in slang term, "weed", which has a calming effect when smoked. He tells O'Reilly he should take some in order to calm down. O'Reilly has often spoken out against the legalization of marijuana, but Lennon thinks he ought to use it regardless.)

Every time I watch your show, all you do is scream at me,

(In early episodes of The O'Reilly Factor, most of the time was spent with O'Reilly screaming at his guests, implying that he brought guests on just to yell at them. He thinks that O'Reilly screams so much, even the audience can feel it.)

And your face looks like a shit I took, high on LSD!

(Lennon says that O'Reilly's face is so ugly that it looks like Lennon's defecation after getting high on acid. LSD causes the user to hallucinate, making even feces appear distorted.)

I'm John Lennon; I'm a legend! I can see through all your tricks!

(Lennon is considered a legend in the history of music. He says he isn't fooled by O'Reilly's tactics against him.)

I wonder how much George Bush paid you to suck his dick!

(O'Reilly and Fox News Channel, the news station where O'Reilly works, are known for their conservative views and supported George W. Bush as president for their own financial gain. To suck someone's dick means to behave submissively for them, so Lennon says that O'Reilly sucked Bush's dick in a figurative sense.)

You fucking long hair, living in your yellow submarine!

("Long hair" references Lennon's hippie persona. "Yellow Submarine" was a song and an animated movie by the Beatles, with one line being, "We all live in a yellow submarine.")

Well, you're about to get sunk by the right-wing political machine!

(Referring to his previous line, O'Reilly is going to "sink" their submarine. O'Reilly often makes references to "the right-wing political machine", referring to the Republican Party as it was when he started his talk-show programs. Although O'Reilly claims he does not associate himself with a political ideology, he is commonly seen as a right-wing political commentator and normally helps conservative causes.)

Stop your presses, Lennon! You call me Mr. Bill O'Reilly!

("Stop the presses" is a phrase stemming from the printed news media industry as an exclamation signifying the discovery of the need to change the content of an issue just before or during its printing. O'Reilly wants Lennon to address him as "Mr. Bill O'Reilly", showing that he has higher authority.)

When it comes to squashing limeys, I come recommended highly!

(A limey is someone who is British like Lennon, and O'Reilly claims he gets recommended to squash them, due to his nature.)

You're weak! Between you and me, there's no comparison!

(O'Reilly supposes he is stronger than Lennon and they simply can't be compared.)

I'll beat you so bad, you weep gently like George Harrison!

(George Harrison, another member of the Beatles, wrote "While My Guitar Gently Weeps", so O'Reilly says Lennon will weep like his guitar after getting beaten by him.)

You're Paul McCartney's bitch with less talent than Ringo,

(O'Reilly continues in mentioning the other members of the band: Paul McCartney and Ringo Starr. While McCartney and Lennon are the two most prominent members of the group, it has been argued that McCartney is more musically talented than Lennon. Of the four, Ringo was said to be the weakest musician, but O'Reilly thinks Lennon's skills is not even better than Ringo's.)

And I'd rather suck George Bush's dick than Yoko Ono's!

(Yoko Ono is a Japanese-born artist, songwriter, and activist who became Lennon's second wife. As a comeback towards Lennon's last line, in which he told O'Reilly to suck George W. Bush's dick, O'Reilly which insults Lennon by saying his wife had a dick as well, and sucking hers would be worse than sucking Bush's.)

("Can't Buy Me Love" is a Beatles song. Lennon's statement means that he won't sell out to O'Reilly, and he will instead kick his ass with no charge.)

I'll take Maxwell's silver hammer and give you a lobotomy!

("Maxwell's Silver Hammer" is another Beatles song, which is an upbeat track about a crazy man named Maxwell who bludgeons several people with a silver hammer. A lobotomy is an outdated surgical procedure for the brain given to patients who were mentally ill, usually with schizophrenia, and it often made patients into vegetables, entirely unable to process information and act accordingly, removing all autonomy. Lennon says that O'Reilly is mentally insane, so he will take Maxwell's silver hammer to make him a vegetable.)

I'm tired of how you scheme to stir the people up!

(O'Reilly is sometimes accused of reporting wrongful thoughts rather than news. His opinions being as they are, those who watch or listen are moved to action. Lennon is weary of O'Reilly's tirades, further inferring that his fanbase is violently crazy.)

Why don't you just take a vacation and shut the fuck up!

(A lot of people would like O'Reilly to shut up about his news. He suggests a vacation could get him away and calm him down.)

(O'Reilly acknowledges that what he does can have done controversial consequences, but he continues to do it. Don Cheadle is an African-American actor who is darker than an average African-American, and O'Reilly uses this to mean that he has a blacker, or more evil, heart than Cheadle's skin color.)

Ten-thousand-dollar shoes I used to stomp out a Beatle!

(His occupation makes him rich enough to spend $10,000 on shoes just to crush a bug, that bug being a beetle: a pun on Lennon's band, the Beatles.)

Don't tell me to shut the fuck up, that's how I survive!

(Responding to Lennon's closing line, O'Reilly says that if he didn't shout at people, then no one would watch his show. He would have zero income should such a thing happen, so he wouldn't be able to survive in the world.)

(During his stint on the television news magazine show Inside Edition, O'Reilly was frustrated to no end with a teleprompter malfunctioning as he was reading one show's sendoff story. This enraged him, resulting in an explosive exchange with the production staff[1], from whence the above quote can be heard. Sting, the lead singer of the rock band The Police, was the performer he was attempting to introduce.)

I'm evil, and I stomp out every feeble Beatle!

I may be white, but my soul is blacker than Don Cheadle!

(These two lyrics are what developed into the lyrics, "Because I'm evil, heart blacker than Don Cheadle! Ten-thousand-dollar shoes I use to stomp out a Beatle!")

Retrieved from "https://epicrapbattlesofhistory.fandom.com/wiki/John_Lennon_vs_Bill_O%27Reilly/Rap_Meanings?oldid=1442260"
Community content is available under CC-BY-SA unless otherwise noted.