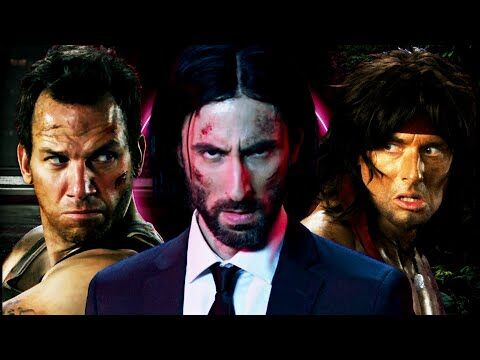 [Note: John McClane is in blue, John Wick is in purple, John Rambo is in red and Sam Trautman is in green.]

All right, I guess I'll be the one to draw First Blood.

Or maybe you could draw an audience to see any of your new movies.

Come out to the coast; we'll have a few laughs. Sounds sweet!

But no, I'm stuck here with these two jerkweeds,

About to kick their ass with bare feet! Argyle, drop the beat!

I'll set it off like the top of Nakatomi!

Need a fire hose to swing on you; you're both so below me!

I haven't stopped killing it since Karl's brother, Tony,

And I got your detonators right here, blow me! (Oops!)

'Cause you'll never take the W without the P and O!

Does your lip hang low? Does it wobble to and fro?

Can you string that shit up on your compound bow?

And lighten up, Wick, with your brooding saga.

How about a little hakuna matata, Baba Yaga?

You got the trousers tapered and the watch, Bucherer,

But your acting falls flatter than the Hans Gruber!

And John, Bubbe, what the fuck's with the chest butter?

That bandolier looks heavy as shit!

I'm like this prick's ring finger: only need one clip!

C'mon! I been sharp as shattered glass since the late '80s,

And like your late pup, I'll leave you pushing up daisies!

Only one of us to go three chapters without sucking.

Between your elevator and the mine where you were trapped,

You're such weiners, I should call you both John Shaft.

I craft rhymes with pencils, then jam 'em in necks,

So I'm not vexed by vets flexing 'roid-injected pecs!

Being excommunicado wasn't more than I could handle,

And this sad, broken dad-joking popo is no foe

And when they land, it won't help to make fists with your toes!

I'll put you two in tombs, call it cryptocurrency.

Raven, Roy, you're done. Over.

Nothing is over! Nothing! You just don't turn it off!

Unless... it's one of your movies. In which case… I just turn it off! Huh!

When I rip off my shirt and start swinging my stick swords,

I'm hotter than the suicide girls on your switchboards!

My headband's red, but I've got no love for commies!

And no juice was used to produce these armies!

Your High Table rules don't apply to this conflict!

I'll finish you right in the lobby! Mission accomplished!

McClane! South is where your marriage went!

The last tight thing you slid in was an air vent!

They used to say you were a handsome crusader.

Too bad your hairline couldn't be saved by Steve Urkel's neighbor. Oh!

I slip into the jungle, disappear like a ghost,

Then ding! I pop up hot behind ya like toast!

I was trained to be the very best soldier boy! Tell 'em!

Simon Says you can PTSDeez nuts!

This is not some Saturday morning cartoon for you to ruin!

The only thing getting ruined is McClane family Christmas!

All your kids still have "decent dad" on their wishlist!

Did your pals in the Taliban help you write those?

Those were mujahideen; there's a difference.

The Taliban formed in the '90s, when you fell off with a vengeance.

Hey! Who the fuck asked you, dog pound?

Why don't you go lock your mouth in a hole in the ground?

You're both a funeral suit away from presentable.

Do a few tours in 'nam, then you can't complain!

Go home, little piggy, or get butchered by my knife!

I've already dealt with enough asshole cops in my life!

None of you could fit my shoes that is the power of Rambo!

Even Arnold failed to rip my shtick when he went Commando!

My rhymes destroy you faster than an M16!

John Wick vs John Rambo vs John McClane. Behind The Scenes. Epic Rap Battles Of History
Community content is available under CC-BY-SA unless otherwise noted.
Advertisement