Joseph Stalin battled Rasputin preceding Vladimir Lenin, Mikhail Gorbachev, and Vladimir Putin in Rasputin vs Stalin. He also made a cameo appearance through reused footage in Alexander the Great vs Ivan the Terrible. He was portrayed by EpicLLOYD on both occasions.

Joseph Vissarionovich Stalin (Russian: Иосиф Виссарионович Сталин), born Ioseb Besarionis dze Jughashvili (Georgian: იოსებ ბესარიონის ძე ჯუღაშვილი), was born on December 18th, 1878, in Gori, Georgia. He was a dictator of the USSR and played a huge role in the Bolshevik Revolution in 1917, succeeding Soviet founder Vladimir Lenin. He ruled the USSR with an iron fist from the mid-1920s to his death in 1953, industrialized Russia under his Five Year Plans, decisively led the Russians to victory against Adolf Hitler in the battles of Moscow, Stalingrad, and Kursk, and led the Soviet Union in the early years of the Cold War.

Under Stalin's rule, the concept of "socialism in one country" became a central principle of Soviet society. He replaced the New Economic Policy introduced by Lenin in the early 1920s with a highly centralized command economy, launching a period of industrialization and collectivization that resulted in the rapid transformation of the USSR from a rural society into an industrial power. However, the economic changes coincided with the imprisonment of millions of people in Soviet correctional labor camps and the deportation of many others to remote areas. The initial upheaval in agriculture disrupted food production and contributed to the catastrophic Soviet famine of 1932–1933, known as the Holodomor in Ukraine. Later, in a period that lasted from 1936–39, Stalin instituted a campaign against alleged enemies of his regime called the Great Purge, in which hundreds of thousands were executed. Major figures in the Communist Party, such as the old Bolsheviks, Leon Trotsky, and several Red Army leaders were killed after being convicted of plotting to overthrow the government and Stalin.

Stalin led the Soviet Union through its post-war reconstruction phase, which saw a significant rise in tension with the Western world that would later lead to the Cold War. During this period, the USSR became the second country in the world to successfully develop a nuclear weapon, after the United States, as well as launching the Great Plan for the Transformation of Nature in response to another widespread famine and the Great Construction Projects of Communism.

Stalin, alongside Mikhail Baryshnikov, Rasputin, Vladimir Lenin, Mikhail Gorbachev, and Vladimir Putin, appeared in Red Square in Ivan the Terrible's first verse during the line, "I'm the first Tsar of all of Russia!"

Look into my eyes, you perverted witch!

See the soul of the man who made Mother Russia his bitch!

You think I give a fuck about my wife?

My own son got locked up in prison, and I didn't save his life!

You got off easy when they pickled that moose cock!

I'd leave your neck in a noose in a trench and shot!

Your whole family; shot! All your wizard friends; shot!

Anyone who sold you pierogi; shot!

Starve you for days 'til you waste away!

I even crush mother fuckers when I'm laid in state!

Pride of Lenin; took Trotsky out of the picture!

Drop the hammer on you harder than I bitch slapped Hitler!

They're calling this for Stalin, I will kick you in the rectum

You should now prepare to be my next Bolshevik-tim

I got this battle locked up like I threw it in the Gulag!

You're a gross and creepy scary-eyed weird wizard

Now poof, disappear and conjure up some beard scissors

I'm Stoli Gold, you're a plastic handle of Popov

I'm majestic, you're a bit thick, I'm not impressed with your magic tricks

I'm sadistic, with a swift kick for a mystic with a missed dick

You want beef? I got the whole Moscow! 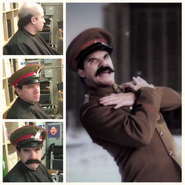 Nice Peter and EpicLLOYD posing as Rasputin and Stalin, respectively, for the Los Angeles Times
Community content is available under CC-BY-SA unless otherwise noted.
Advertisement