Epic Rap Battles of History Wiki
Register
Don't have an account?
Sign In
Advertisement
in: Actors, Dis Raps For Hire, Season 4,
and 5 more

Josie Ahlquist portrayed Bess Houdini in David Copperfield vs Harry Houdini and appeared as herself in Jeff Bezos vs Mansa Musa. She also did the voiceover for the message in the Dis Raps For Hire episode "This Guy". Furthermore, she made an appearance in one of EpicLLOYD's Hopefully It's Friday Vlogs, in which she was tasked with answering questions about her husband, with her answers then being compared to Lloyd's answers, and vice-versa.

Josie Ahlquist (née Hutchinson) was born on April 5th, 1981, in Wyoming, United States. She is a student affairs educator, author, doctor, and the wife of EpicLLOYD. Her website can be found here. As of May 8th, 2015, Josie is a member of the ERB Wiki. Her account can be found here.

She appeared on the magazine cover during Mansa Musa's second verse alongside with her husband. 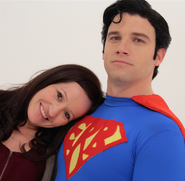 A Behind the Scenes look at Josie with EpicLLOYD as Superman 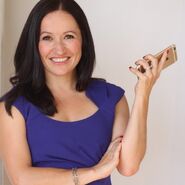