Gaius Julius Caesar, simply known as Julius Caesar or Caesar, was born circa July 12th, 100 BC, in Rome, Italy. He was a statesman and general who marked the beginning of a new chapter for Roman history.

By the time he was 31, Caesar fought in several wars and became involved in Roman politics. As he began to cultivate his political partnership alongside former lieutenant Pompey the Great, the astute leader also aligned himself with Marcus Licinius Crassus, a Roman general and politician. Crassus proved to be instrumental in Caesar's rise to power, offering financial and political support.

Over the years, Pompey and Crassus had come to be intense rivals. This was resolved with Caesar's help, who displayed his abilities as an excellent negotiator, earning the trust of both men and convincing them they would be better suited as allies instead of enemies. This partnership among the three men came to be known as the First Triumvirate. For Caesar, this political alliance and the power it gave him was the perfect springboard to greater domination.

While in Egypt, Caesar had an affair with pharaoh and member of the Ptolemaic dynasty, Cleopatra, with whom he had a son, Caesarion. Upon his return to Rome, Caesar was made dictator for life and played a key role in the demise of the Roman Republic and the rise of the Roman Empire, which was accomplished by greatly expanding its geographic reach and establishing its imperial system.

Caesar also proved to be a benevolent victor by inviting some of his defeated rivals to join him in the government. However, this decision only helped assist in his downfall, as Gaius Cassius Longinus and Marcus Junius Brutus were both former enemies who had joined Caesar, and together, led his assassination on the Ides of March (the 15th), 44 BC. Following his death, Caesar quickly became a martyr in the new Roman Empire, which never returned to the Roman Republic.

[Note: Julius Caesar is in red, while the Roman soldiers are in regular text.]

You talk a lot of shit for a man wearing a diaper.

I heard you had poison spit. Where was it in this cypher?

'Cause all I hear is threats from a brute with no discipline,

And I'm ruling over you like a boot full of my citizens!

You should take your cow skin shield and hide under it!

You're fucking with the most triumphant third of the Triumvirate!

I'm first of the empire and last of the republicans,

And hunting you, accompanied by legions of my countrymen!

(Ooh!) Ask my kidnappers if I'm just a shit talker.

So don't go rattling your sticks at me!

If I wanted to shake spears, I'd waggle my biography!

Oooh, can I be a hyena? 'Cause I'm going to laugh!

I'll pave roads with the bones of your goat-herding ass!

First, my front lines will drop back and spank you in the chest,

Then I'll decimate your horns; you can't outflank the best!

Let your reserves come at me. My ballista's cocked and ready!

When I take aim, I always keep my whole crew steady!

Because there's no use in murdering you and your heathen.

You can grow my wheat for me after you're beaten.

Mad rhymes are doper than any verse you ever kicked, 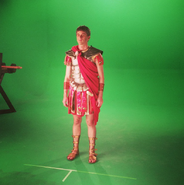 A photo of Caesar in front of the green screen from Mike Betette's Instagram account
Add a photo to this gallery
Retrieved from "https://epicrapbattlesofhistory.fandom.com/wiki/Julius_Caesar?oldid=1456195"
Community content is available under CC-BY-SA unless otherwise noted.