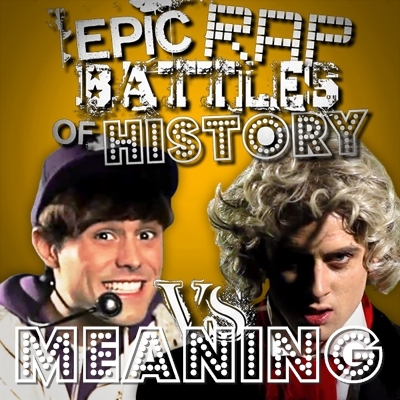 (This is an alteration of the phrase, "Look what the cat dragged in," which means meeting someone you dislike. The phrase is changed due to Beethoven being dead.)

(Chewbacca is a Star Wars character who has woolly hair similar to Beethoven's. Bieber says that Beethoven's head looks like it has some of Chewbacca's posterior hair left on it.)

(Michael Jackson became a celebrity as a 6-year-old, and he was very successful as a solo singer until his death in 2009. Similarly, Bieber was a celebrity at around the age of 12 when he was picked up by Usher after he found him singing on a YouTube vlog. Bieber claims to be the next King of Pop like Michael Jackson. He also compares Beethoven to Betty White, an American actress who was 89 at the time of the battle, starting her career in 1939, being born in 1922, implying that Beethoven is old news.)

(Fans of Bieber are stated to have "Bieber Fever". When you have a fever, you normally take an aspirin pill to feel better. Bieber tells Beethoven that after this, Beethoven will become a fan of Bieber.)

Because my voice is incredible and your music is terrible,

(Bieber thinks that his vocal talent is superior to Beethoven's compositions.)

Who even listens to classical anyway?

(Classical music is going down in terms of popularity, as many instead choose to listen to modern music such as Bieber's.)

(One of Beethoven's most popular works, "Für Elise", was likely written for one of his piano students, Elise (though the most widely believed dedicatee was Therese Malfatti, whose name may have been accidentally transcribed from "Therese" to "Elise"), to whom Beethoven had proposed, but was turned down, and she instead married Wilhelm von Droßdik, an Austrian nobleman and state official. Bieber says that while she rejected Beethoven, she would probably prefer to be with Bieber due to his appeal among younger girls. Also, while Beethoven is close to him, Bieber notices something about him that is stated in the next line.)

(Beethoven is a 1992 family comedy film featuring a Saint Bernard named after the composer. Bieber implies that Beethoven looks similar to a dog, which is why the dog is named after him.)

(Beethoven says that Bieber doesn't know how to make music, so he'll show him how a real musician plays.)

(Johann Sebastian Bach is another famous classical composer whose music Beethoven had studied. Smith & Wesson is a manufacturer of firearms, and guns are cocked before shooting. He says his dick has more "cock" than a cocked gun, believing that even other historical figures in music would be aware of his large manhood.)

(Beethoven says that the title of Bieber's song, "Never Say Never", is wrong because Bieber will never forget him after this battle.)

I crafted masterpieces that will last throughout the ages!

(Beethoven is considered one of the greatest composers of all time. He claims that his music will always be remembered, while Bieber's songs will be eventually forgotten.)

(Beethoven states that in contrast to his timeless legacy, Bieber will only be known for the overly obsessive fans on his social media sites. Many Bieber fans are known to be crazy for his music and have occasionally done many over-the-top or ridiculous things in places such as Facebook.)

(Double entendre: a major third is a musical interval, and here, it's put together with a third-degree murder, which means a murder that resulted from indifference or negligence. Beethoven states that he'll kill Bieber using his raps without even trying.)

My name is Beethoven, motherfucker! Maybe you've heard of me!

(Beethoven sarcastically mentions how well-known he is.)

(O.G. means "Original Gangster". Beethoven mentions the Saint Bernard line again, saying he's the real deal, since the dog was only named after him.)

(Trading blows means throwing punches or fighting. Bieber had a voice that, at the time, was higher and more feminine than an average male at his age; therefore, since he could not figuratively hit puberty, he wouldn't be able to do so physically. In other words, Beethoven taunts Bieber for trying to fight when he can't even "hit" puberty.)

I've got Kim Kardashian in my bed backstage.

(Bieber says he can get any hot girl he wants, even the famous model/actress Kim Kardashian. He once tweeted as a joke that Kardashian was his girlfriend and sent a photo of them.)

(Bieber claims that just his music can attract girls to have sex with him. In contrast, he states that Beethoven's music can't get him laid with anyone.)

(Bieber frequently gives concerts for his large female fanbase. He says that he has no more time to battle since he has a concert starting in a few minutes.)

(Despite his masterpieces, Beethoven became deaf later in his life and was unable to hear them. Bieber implies that Beethoven's music is so bad, he made himself go deaf from hearing it.)

(Like most people who dislike Bieber, Beethoven wants to smack him. Beethoven was a German composer, and he says that in Germany, they don't allow hitting little girls. Bieber is often called a girl by people who dislike his music because of how feminine his voice sounds and how baby-faced he appears to be.)

And I'm glad I'm deaf, so I can't hear that piece of shit, My World!

(My World was Justin Bieber's first ever EP, which was supplemented by his debut studio album My World 2.0. Beethoven refers to Bieber's last line by saying that he'd rather be deaf than listen to Bieber's terrible music.)

(There are still many people who enjoy listening to Beethoven's music.)

(Usher is a singer who found Bieber and made him a famous pop star. An usher is also someone who shows people to their seats in a theater. He says that Bieber wants to copy Usher's talent, so at the end of the video, he turns him into an usher and tells him to show the crowd to their seats for Beethoven's concert.)

Retrieved from "https://epicrapbattlesofhistory.fandom.com/wiki/Justin_Bieber_vs_Beethoven/Rap_Meanings?oldid=1463099"
Community content is available under CC-BY-SA unless otherwise noted.