Information on the actors

Kai Julian and Naya Liyell Berman were born on July 10, 2010, in Los Angeles, California. They are twin boy/girl and the children of Richard and Andrea Berman. They were found for the role by EpicLLOYD, as their mother was an old college friend of his.

Kai and Naya Berman as Ignorance and Want 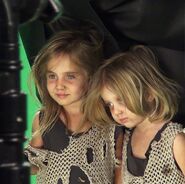 A behind the scenes look at Kai and Naya under DeStorm Power as Kanye West
Add a photo to this gallery
Retrieved from "https://epicrapbattlesofhistory.fandom.com/wiki/Kai_and_Naya_Berman?oldid=1403642"
Community content is available under CC-BY-SA unless otherwise noted.